Report from Indian Media about Maoist Activity in Urban Areas 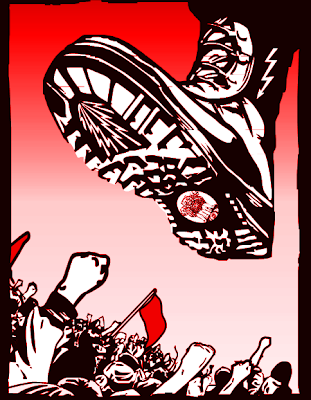 Democracy and Class Struggle publishes this article for comrades to see the media war against Indian Maoists or even supporters of democratic rights in India like the RDF.

The War on the People of India by the Indian State is as violent as ever, but this state violence goes unreported in the Media while any resistance to Indian State Land Grabs is labelled "Maoist" violence.

Look at this headline from Daily Mail India below from article by Abhishek Bhalla.

Trying to whip up hostility to Maoists and popular democratic organisations like the Revolutionary Democratic Front.

Left extremists have infiltrated workers' organisations in Delhi and the National Capital Region (NCR) with plans for supporting violent protests, according to intelligence agencies. A note prepared by the Intelligence Bureau (IB) provides evidence of this dangerous design by Maoists to create unrest closer home in urban areas - and not merely in distant Gadchiroli, Dantewada and West Midnapore. The violence at the Maruti factory in Manesar on July 18 this year - in which Maruti Suzuki's general manager for human resources was killed - was supported by Left-wing extremist groups, according to a secret IB note prepared last month.

Maruti employees on a strike in July The violent upsurge had come on the back of earlier agitations at the Maruti factory that had stalled work thrice last year. 'What I had said earlier about the possibility of involvement of Left-wing extremists was based on my estimation of facts and it was a hypothesis. 'Whether they were involved or not needs to be investigated. Let's see what comes out of the investigation,' said R.C. Bhargava, chairman of Maruti Suzuki India. Systematically collating the inputs to find proof of Maoist involvement in violence involving workers, intelligence agencies have been able to establish the identity of the Revolutionary Democratic Front (RDF), a front organisation of the CPI (Maoist).

According to the IB note, the front has 'exhorted the workers to continue the struggle.' The note also says that they have 'resolved to launch a militant campaign against caste violence'. Sources say the RDF has become the urban face of the Maoist movement and is attempting to expand its base in other metropolises. According to intelligence sources, its activities are not limited to Delhi and NCR even though it is most active here. The shocking revelations have only endorsed what had been suspected for long. 'This has been part of their strategy to gradually enter urban areas and quietly carry on with their activities. 'These are like sleeper cells. With recent arrests made from in and around Delhi, the interrogation of the suspects should reveal more. But sometimes the Maoist inroad theory in cities like Delhi can be a little exaggerated,' said A.S. Dulat, former chief of the Research and Analysis Wing (R&AW). According to Prakash Singh, former director general of the Border Security Force (BSF), the Maoist ideology is attractive to a certain class of people in urban areas.

'It started with colleges in Delhi and other urban centres. But now it's more sinister. A case in point is the golden corridor, the route from Pune to Ahmedabad,' said Singh who is the author of 'The Naxalite movement in India'. A blueprint of the Ultra Left's base in urban areas was exposed three years back when top Maoist leader Kobad Ghandy, allegedly responsible for recruiting and setting up bases in the metros, was arrested in Delhi. Back in 2009, the intelligence agencies had realised that the Maoist base was expanding. Ghandy's arrest proved to be a setback for the Maoists but intelligence agencies believe that of late Left-wing extremism is gathering support in urban areas. Delhi and the national capital region is a fertile ground for new recruits and growth. This now a matter of record. Recently, responding to a Parliament question, minister of state for home Jitendra Singh said that 7 out of 11 districts in Delhi were witness to Left-wing extremism. Sources say that several Maoists are active in Gurgaon and Ghaziabad. Intelligence inputs indicate that using the RDF front, they are trying to find a toehold in workers' associations.

The evident purpose is to work from within and motivate the workers to carry out violent protests and destabilise the state. 'The emergence of Delhi or Mumbai is one of the reasons for this phenomenon. There is a city within a city and slum within a slum. The demography of these cities challenges India's security whether it is from jihadis or Maoists. 'Some of these areas become more vulnerable to Maoist influence presenting a big challenge in urban areas,' said security expert commodore (retd) Uday Bhaskar. The government response to this spreading network has been poor, according to analysts. 'The government's approach to the problem has also been very confused,' said Prakash Singh. While earlier reports suggested the presence of Left-wing extremists among workers, th e Haryana police, as part of their investigation had dismissed the theory. The police in their probe had ruled out Maoists' involvement in the Manesar incident.

This could be incorrect. 'It is suspected the some members of these groups instigated workers and are continuing to do so. They have support in Delhi and the adjoining areas,' said an intelligence source. After the violence at the Maruti factory more than 90 workers were arrested and booked for murder, attempt to murder, rioting with weapons, assault and trespass.

According to the IB note, the RDF at its executive meeting in Delhi on August 1-2, while referring to the Manesar violence as a 'militant movement of factory workers', had resolved to extend all support to the movement and demanded the release of the arrested workers and withdrawal of cases against them. Intelligence agencies have information that the RDF has given a call to its fraternal organisations to participate and lead the retaliation against 'violence by dominant classes'.