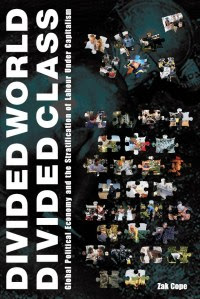 Divided World Divided Class by Zak Cope charts the history of the ‘labour aristocracy’ in the capitalist world system, from its roots in colonialism to its birth and eventual maturation into a full-fledged middle class in the age of imperialism.

It argues that pervasive national, racial and cultural chauvinism in the core capitalist countries is not primarily attributable to “false class consciousness”, ideological indoctrination or ignorance as much left and liberal thinking assumes.

Rather, these and related forms of bigotry are concentrated expressions of the major social strata of the core capitalist nations’ shared economic interest in the exploitation and repression of dependent nations.

The book demonstrates not only how redistribution of income derived from super-exploitation has allowed for the amelioration of class conflict in the wealthy capitalist countries, it also shows that the exorbitant ‘super-wage’ paid to workers there has meant the disappearance of a domestic vehicle for socialism, an exploited working class.

Rather, in its place is a deeply conservative metropolitan workforce committed to maintaining, and even extending, its privileged position through imperialism.

“This is a surprising book. At a time when confusion about Globalization surrounds us, Zak Cope pulls us towards what is fundamental. He outlines the 19th & 20th century recasting of the diverse human world into rigid forms of oppressed colonized societies and oppressor colonizing societies. A world divide still heavily determining our lives.

Working rigorously in a marxist-leninist vein, the author focuses on how imperialism led to a giant metropolis where even the main working class itself is heavily socially bribed and loyal to capitalist oppression. Much is laid aside in his analysis, in order to concentrate on only what he considers the most basic structure of all in world capitalist society.

This is writing both controversial and foundational at one and the same time.” - J. Sakai, author of Settlers: Mythology of the White Proletariat

Divided World Divided Class is the first book in Kersplebedeb‘s “Kalikot Book Series” and can be purchased at Kersplebedeb for $20 USD/CAD.

Democracy and Class Struggle says we hope this book creates some controversy and discussion has it has been quite a long time since J Sakai's work and the questions it raises about class and race.  We welcome the publication of this book and the issues it raises.

However this is not be taken to mean that Democracy and Class Struggle agrees with the views expressed in the book - we would however welcome a debate around the questions raised by Zak Cope.
Posted by nickglais on 9/14/2012 01:51:00 AM