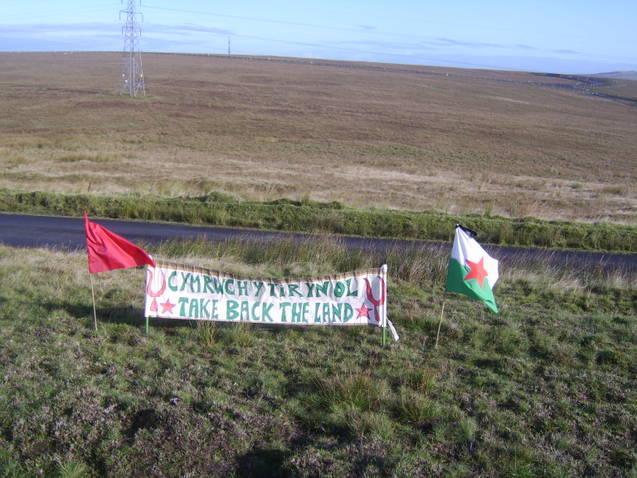 Following the complete occupation of Wales by the Anglo Normans in 1282 - 4 and again, in the 1420's following the War of Independence led by the great Welsh Prince Owain Glyndwr, great areas of Welsh land was either taken by the English Crown or 'given' as rewards to English barons for fighting for England in the Welsh Wars.

Ironically this was repeated by the Tudors in the 16th, who were of 'Welsh Descent', One such example being the Dukes of Somerset being given Mynydd y Gwair and much else throughout Southern Wales. This Mountain is now the centre of a major local issue and national campaign as the Somerset Trust intends to establish a Wind Mill Plantation on it.

Apart from the above, much of Welsh land was common land - which meant that the peasantry had the right to build a smallholding on it as well as hunt and fish but, increasingly over the centuries and up to the present, the Gentry and incoming 'New Conquistadores, such as Iron and Slate Masters began to seize this Common Land by means of Enclosure Acts. The issue of Anglican Church ownership was very much addressed in the Welsh Tithe Wars of 1886 - 88 by a National Land League but there is still much unfinished business to be taken care of.

Today, the aforementioned land is still occupied by the English Crown and the descendents of the English barons and, increasingly, by outside 'Utiliy Companies as in the case of the Vyrnwy Estate, It is being extensively plundered of its natural resources, such as water and timber, and is being savagely destroyed by gigantic windfarms. It is our Welsh herital land and we want it returned to the communities and people of Wales through this Wales Land Act.

In view of the fact that our Cymric land is being desecrated by rapacious landlords, hereditary aristocrats, the English Crown and Corporate Utility Companies this Petition demands of the Westminster Parliament and the Welsh Government the restoration of the land, by compulsory purchase, to its rightful owner, the People of Cymru, in order to preserve our heritage, the great beauty of this land and the common right of our people to access and make use of it until perpetuity.