We are being encircled by the reactionaries 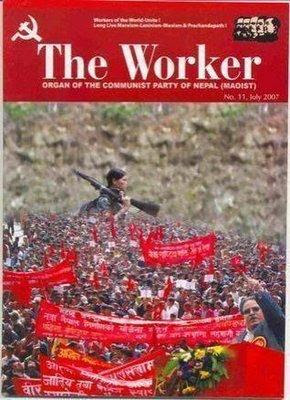 The CPN (Maoist) is now at the stage of peaceful revolution. Revolution in itself is meant to politically overthrow the enemy from state power. How can you recognize your enemy at this peaceful stage?

Generally speaking, the revolution is meant to violently overthrow the class enemy from the state power. However, one must not one-sidedly understand that the revolution necessarily takes a violent form all through its course. The form of struggle is determined not by the subjective wish of the struggling forces but of course by the objective condition and the balance of forces at the given period. At a certain juncture and certain condition, the revolution can develop in a peaceful way. Our participation in the two negotiations in the past and the present peace process are examples of peaceful development of revolution. Nevertheless, it is wrong to categorically separate revolution as two distinct stages, the violent or peaceful, as your question points to.

The enemy, at any particular juncture of revolution, is not determined by whether the revolution is developing in a violent or non-violent way but by which class, in the then socio-economic condition of the given country plays a decisive role in the state power. Nepal is a semi-feudal and semi-colonial country. Although, the feudal institution, the monarchy, has been abolished but feudalism, which is strongly present in petty production system and culture of the Nepalese people, is by no means over. However, the bureaucrat and comprador bourgeois, through which imperialism and mainly the Indian expansionism penetrate into our country, and, which stands against the Nepalese people’s aspiration of democracy, independence, sovereignty and territorial integrity at the present juncture, this has been the principal enemy of the new democratic revolution in Nepal.

Has the CPN (Maoist) identified the nature of struggle at the present phase of revolution? Is it civil war or national liberation war?

After the accomplishment of constituent assembly election and declaration of federal democratic republic of Nepal, the political equation has changed to a great extent. Without a decisive victory against feudalism and imperialism, mainly Indian expansionism in our case, no new democratic revolution can triumph in semi-feudal and semi-colonial Nepal. Now, the Comprador bourgeoisie has come at the forefront of the class struggle in Nepal. Therefore, the national aspect of the New Democratic Revolution has become principal at present.

If the class struggle has not ended, then why does the Party Chairman and Prime Minister Com. Prachanda repeatedly talk about keeping a harmonious relationship between worker s and management?

We are now at the stage of New Democratic Revolution not the Socialist one. So, resolution of the basic contradiction, which is made up of the broad peasantry and patriotic forces on the one hand and feudalism and imperialism on the other, is the necessary precondition for the accomplishment of New Democratic Revolution in Nepal. Hence, it is clear that the contradiction between worker and the national bourgeois is not the principal contradiction right now so the need to maintain a harmonious relation between them is obvious.

What do you mean by maintaining equidistant relationship with the two neighbouring countries, India and China?

Nepal lies between two giant nations India and China. In the past, it had been an erroneous practice that one section of the reactionaries played the China card while the other played the India one to grab a bigger share in the reactionary power. But given our geo-political situation, we cannot sustain and prosper both politically and economically unless we maintain an equidistant diplomatic relation with these countries.

Is the forthcoming full central committee meeting going to take up some important decisions about demarcating the roles and responsibilities between the Party and the Government?

With the successful accomplishment of Constituent Assembly election our Party, the CPN (Maoist), is now participating in the government. Our participation is a political tactic aimed at accomplishing the new democratic revolution by restructuring the state power. Therefore it is one of the fronts of class struggle.

However, in the present situation when the tasks and responsibilities of our party are mainly on how it can play a revolutionary role from the government have not been concretely defined. Some confusion has arisen among the ranks, the revolutionary masses and the international communist movement as well. It is the party which leads the government not vice versa. With this in mind, the forthcoming central committee meeting is going to concretely define and assign tasks and responsibilities to the government, our comrades present in the constituent assembly and the entire party ranks and the mass organisations. Not only this, the party is going to develop concrete policy, plan and programme to centrally command and coordinate all of the fronts of struggle including the government.

Do you think it is necessary to review the party document regarding 21st century democracy?

Dr. Baburam Bhattarai, one of the senior leaders of our party, has brought out a budget on behalf of the present coalition government under our party leadership. It is true the budget is progressive and it has attempted to address the basic problems of the oppressed class, sex, nations and regions. For that reason one may find a few aspects of socialist economy in it. But the budget alone cannot be a criterion to make it a new democratic, socialist or capitalist. As part of the communist party’s comprehensive ideological and political line, it is the political and economic programme that makes the economy new democratic or socialist depending upon the stage of revolution.

The present budget has been brought out on the basis of common minimum programme agreed upon by the coalition partners that have no common economic and political understanding. In this sense, it is better to term this economy as the economy suitable for the present transitional condition in which a revolutionary and status quo forces in the coalition are contending for their ultimate goals.

Many of the Party leaders accept that the CPN (Maoist) is being encircled by the reactionaries around. What are the Party policies and programmes to break encirclement to achieve the goal?

The new democratic revolution in Nepal is at the crucial juncture of seizing central power under our party leadership. The reactionaries and the opportunists the world over do not want the revolution to succeed in Nepal. Therefore it is true that we are being encircled by the reactionaries to make the revolution abort before it takes its birth.

However, despite their effort, the CPN (Maoist) and the oppressed Nepalese people are equipped with a scientific ideology, Marxism-Leninism-Maoism and Prachanda Path and can make the entire encirclements and conspiracies fail and so the success of new democratic revolution is inevitable. The forthcoming central committee meeting is going to bring out concrete policy, plan and programme to achieve this minimum strategic goal.

First Published in Red Star - Paper of The CPN Maoist