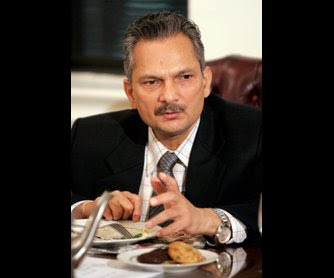 Even as the onetime Maoist insurgent struggles to modernize the economy of his poor, landlocked Asian nation, the world's greatest champion of free markets and free enterprise is preparing a massive taxpayer bailout of its collapsing stock and credit markets.

"I think the U.S. is moving toward socialism and we are moving to capitalism," he joked in a luncheon interview with editors and reporters at The Washington Times this week.

Mr. Bhattarai, named finance minister in the communist-dominated government that took office in August, said Nepal's relative isolation from the global economy has been a blessing in disguise given the current world financial turmoil. More than two-thirds of Nepal's 29 million people work in agriculture and officials are still trying to rebuild the basics of the economy after a lengthy civil war that resulted in the abolition of the monarchy in April.

"The world economic crisis will affect everybody. Nobody is immune from this," said Mr. Bhattarai, in Washington for the annual meetings of the World Bank and International Monetary Fund.

But he added that the pain may be less for countries like Nepal.

"My own feeling is we are in a periphery economy. Our economy is mostly agricultural and non-monetary, so it is not as integrated with the world economy," he said.

In addition, India, which is by far Nepal's biggest trading partner, also appears to be relatively sheltered from the global economic unrest.

But Mr. Bhattarai said he is concerned that a possible global recession could mean a decline in financial assistance, both from international institutions like the IMF and from individual donors like the United States. The government is seeking nearly $400 million in donor aid to meet its budget plans, he told World Bank and IMF officials over the weekend.

"We have an agenda to develop our industrial economy that we are focusing on," he said. But he said the country wants to promote small enterprise and rural development, a mixed strategy he called "walking with two legs."

He added that Nepal, home to eight of the world's 10 highest mountains, including Mount Everest, is banking on a revival of tourism now that it has achieved political stability.

He noted that even during the worst of the fighting between the government and the Maoist insurgency, "there was not a single foreign national who was harmed."

The IMF last week forecast economic growth of 5.5 percent for Nepal in 2009, far below the double-digit growth rates of other Asian tigers in recent years, but above the estimated 3 percent to 4 percent growth for 2007 and 2008 as Nepal emerged from more than a decade of civil strife.

He acknowledged the government still had reservations about economic globalization and the danger that small, poor countries like Nepal could be dominated by large multinational companies.

"On this issue, we do have reservations, but we need investment, we need capital," he said. "So there has to be a balance."

Located between Asia's two booming superpowers, China and India, Mr. Bhattarai said Nepal was watching closely the strengthening of ties between Washington and New Delhi, including the just-approved U.S.-India civilian nuclear agreement. He said Katmandu has long looked to the United States to counter the pressure it receives from its giant neighbors.

"When the U.S. moves closer to India, it tends to be a bad thing for Nepal," he said. "India's policy [for the region] will be the U.S. policy, and the result will not be a balanced package."

According to Kantipur daily, he said so when talking with an editor of Washington Times in Washington DC.

When the editor asked if the time had come to change the name of CPN-M as Mao was becoming ‘old’ even in China, Dr. Bhattarai replied in affirmative, and, added, “We are discussing this within the party since past one year. The general convention will make a decision on that.”

He also said that they coined the name CPN-M as it was quite revolutionary when fighting against monarchy.

The Finance Minister is in America to attend the annual meeting of the board of governors of the World Bank and International Monetary Fund.

Democracy and Class Struggle is aware that as a result of merger talks with other Communist Parties in Nepal there has been discussion of a new name for the merged Communist Party.

However we are of the view that the Communist Party of Nepal Maoist should retain its current name.
Posted by nickglais on 10/16/2008 02:19:00 AM