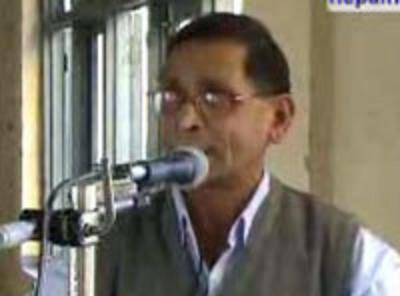 Kathmandu, Oct 7 (ANI): The Communist Party of Nepal-Maoist (CPN-M) on Tuesday postponed its Central Committee (CC) meeting for a month.

It was decided at a meeting today, which was held for a short time, Maoist Chairman Prachandal gave brief answers to the questions raised by the central members on the political report tabled by him.

“The meeting has been deferred for a month in view of the intensive discussions on People’s Republic, federal democratic republic, army integration and new working strategy,” Kantipur quoted Maoist spokesperson and Minister for Information and Communications Krishna Bahadur Mahara as saying.

He also informed that the meeting was deferred for a long time due to Dashain and Tihar.

According to media reports, there was strong debate between the hardliners and moderates over the issues of federal democracy and people’s republic.

Central member Devendra Poudel informed the media that the meeting has decided to make decisions on issues such as future direction, organisational structure and government operation through deliberations at the national convention.

Meanwhile, Maoist leader Mohan Baidya ‘Kiran’ said that a better democratic system can be taken as a people’s republic.

“Taking lessons from the examples of failure of communism in European countries, we should take democratic system to a new height so that the democracy deals with the people’s problems properly,” he said. Source ANI)
Posted by nickglais on 10/08/2008 10:15:00 AM