Mohan Baidya, said there are no plans to change the party name 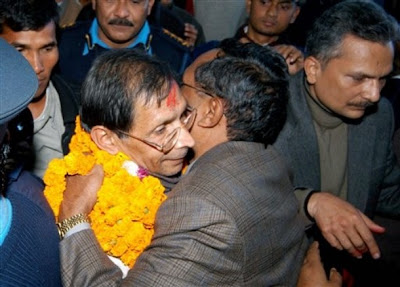 Photo Mohan Vaidya being welcomed after release from prision in India

Hours after Finance Minister and Maoist leader Dr Baburam Bhattarai told journalists that his party is mulling to change its name, another senior Maoist leader, Mohan Baidya, said there are no plans to change the party name, and that Bhattarai would have to furnish clarification regarding his statement.

Speaking at the Reporters Club Friday Baidya, of the Maoist party, claimed that the party is not going to shed its 'tag name' [Maoist] in near future.

Baidya said Bhattarai would be asked to clarify his remarks during the next party meeting. "Those were Bhattarai's personal views," he said, resenting Bhattarai's publicly statement "on an issue which has not been decided".

Stating that there are clearly two lines in the Maoist party, Baidya however refuted speculation that the internal dispute might lead to a split, and claimed that party would be further consolidated and united.

Meanwhile, talking to journalists in Nepalgunj today Prime Minister Prachanda revealed that he had proposed to change party's name two years back and that the issue is under discussion.

Prachanda also stressed the need to induct most Maoist combatants into Nepal Army and warned of "dire consequences" if obstacles were put in the process of army integration.

Similarly, Baidya mentioned that some PLA personnel would be inducted into
the national army while others will be taken into border security force or industrial security force.

Since the peace agreement has clearly mentioned about the modalities of army integration, it would not matter even if some parties take to streets against the process, he added.

While reiterating the party's line in favour of multi-party system, Baidya said the Maoists' ultimate goal is to establish People's Republic
Posted by nickglais on 10/18/2008 05:03:00 AM