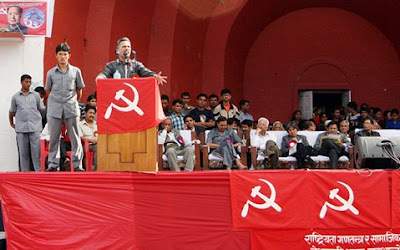 The central committee of the Maoists ended, Tuesday, after deciding to hold national conference on November 10.

"The central committee meeting ended and we have now decided to settle all the issues through the National Conference, which will be held on November 10," Barsha Man Pun Ananta told Nepal FM.

At the CC meeting, Prime Minister Prachanda is said to have proposed to go for National Conference to settle debates on what sort of "People's Republic" the party wants to establish, among others.

According to Ananta, party chairman will present a political document at the conference for discussion.
Posted by nickglais on 10/07/2008 05:22:00 AM