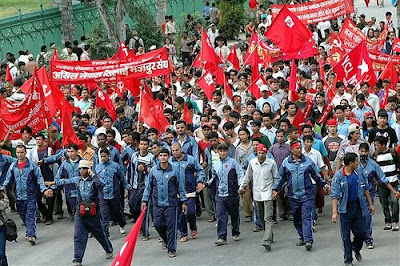 Democracy and Class Struggle is pleased to publish a report from comrade Harry Powell in Nepal.

The Communist Party of Nepal (Maoist) is engaged in a sharp two line struggle over the way forward for the Nepalese people. On one side are those, such as Comrade Kiran, who want to proceed rapidly to the establishment of a new democratic type of regime.

On the other side are those such as Comrade Prachanda, Party Chairman and Prime Minister, who seem to be envisaging a fairly long period of bourgeois parliamentary democracy which could eventually lead to some sort of new democracy.

Prachanda has been proposing that some of the other communist groupings, who opposed the People’s War, merge with the CPN(M) to form a new Communist Party of Nepal. Some other leading comrades are vigorously opposed to such amalgamations.

A Party Conference to debate these issues commences on 6th. November.We should be careful of trying to understand contemporary political developments in terms of making crude historical analogies with past conjunctures. But on this occasion it might be useful to make some comparisons with the situation in Russia in 1917.A prominent comrade said to me that while the Maoists have formed a government, they do not yet have state power.

One major issue is the question of the integration of the Nepal (formerly Royal) Army with the People’s Liberation Army. The Nepal Army commanders and the reactionary Nepali Congress party are opposing such a change. They say that PLA personnel could apply to join the Nepal Army. This is unacceptable to the CPN(M) who want full integration on a basis of equality.This particular issue highlights the fact that in Nepal today there is a situation of “dual power” rather like the one in Russia between February and October 1917.

Then there was a bourgeois liberal government presiding over the old Tsarist state apparatus but at the same time the Soviets (councils of soldiers, workers and peasants) had arisen and exercised considerable popular power. In Nepal although as a result of the Constituent Assembly elections the CPN(M) have formed a minority government, the rest of the old reactionary state apparatus remains in place. The Nepal Army, the police and the civil administration remain unreconstructed.

Counterposed to this is the continued existence of the PLA, the militant Young Communist League and strong Maoist-led trade unions. The key issue in Nepal is whether or not the old army and police can be neutralized or dismantled. Otherwise there is the danger of a military coup at some point.

Another parallel with 1917 is that “Menshevik” and “Bolshevik” factions seem to emerging within the CPN(M). On the one hand are those who see the future of Nepal in terms of a fairly long period of capitalist development which could eventually lay the basis for socialist transformation. On the other hand are comrades who want capitalist economic development to be closely supervised by the state and to fairly quickly start implementing socialist developments.

A positive feature of these controversies is that the Party’s two-line struggle is out in the open. There is no attempt to impose “monolithic unity”. Unity comes through struggle.
Posted by nickglais on 10/21/2008 04:34:00 AM