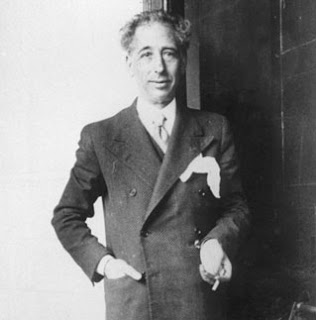 
After the death of Francesc Macià in 1933, at that time presiding over the Catalan government (Generalitat), Companys was elected the successor President of the Generalitat by the Catalan Parliament.

In October 6, 1934, Companys led a Catalan Nationalist uprising not supported by the center and conservatives Catalan representatives, against the center and right-wing republican government, and proclaimed the Catalan State (Estat Català) within the "Spanish Federal Republic", an action by which he was arrested and sentenced to thirty years in prison.

Companys asked Manuel Azaña, who happened to be in Barcelona during the events, to lead a newly proclaimed Spanish Republican government, a proposition that Azaña rejected.


After the 1936 election and the victory of the left-wing coalition Frente Popular, he was set free by the new government and the Catalan government was restored

Proclamation of the Catalan State

For some time now, monarchist and fascist forces have been awaiting an opportunity to betray the Republic. They have now achieved their objective and have seized power.

The parties and men who have publicly demonstrated against the longed for liberties of our land, along with the political centre which has constantly preached hate and war towards Catalonia, today make up the backbone of support for current institutions.

Recent events have given all citizens the manifest feeling that the Republic, in its fundamental democratic form, is in the gravest danger.

All of the authentically Republican forces of Spain and its more advanced social sectors, without distinction or exception, have taken up arms against this brazen fascist takeover.

A Liberal, Democratic and Republican Catalonia cannot be absent from the protest that is triumphing all over the country; nor can it silence its declarations of solidarity towards our brothers who, throughout Hispanic lands, are fighting to the death for Liberty and Right. Catalonia has hoisted its flag! We call on everyone to do their duty and give their unswerving loyalty to the government of the Generalitat, which, from this moment, breaks off all relations with these deceitful institutions.

In this solemn hour, in the name of the people and of Parliament, the government over which I preside has taken over all the faculties of power in Catalonia and proclaimed the CATALAN STATE within the federal Spanish Republic. In order to establish and fortify our relationship with the leaders of the general protest against fascism, we invite them to establish in Catalonia the Provisional Government of the Republic. They will find that we Catalans will demonstrate the most generous fraternity in our common aim of building a Federal Republic that is free and magnificent.

The Government of Catalonia will be in constant touch with the people. We will establish in Catalonia an indestructible stronghold fortified by the true spirit of the Republic. We encourage all Catalans to obey the Government and require that no one ignores its orders.

With the enthusiasm and discipline of the people, we feel strengthened and invincible. We will keep everyone in line, but it is essential that each one of you maintain calm and subject yourself to the discipline and instructions of your leaders. From this moment on, the government will work ceaselessly to ensure that nobody disrupts, or compromises, our patriotic objectives.

Catalans: the hour is grave and glorious. The spirit of President Macià, the restorer of the Generalitat, is with us. Everyone to your stations and keep Catalonia and the Republic in all of your hearts.

Given that you are anonymous I cannot be sure where you come from - all I suggest is that study the question more deeply - of course bourgeois nationalism is something that we fight but we also fight for what is democratic in national demands like self determination - we are not Proudonists or luxembourgists on the national question but Leninists.

Lenin clarified this question for those socialists who sought to counterpose the fight for "pure socialism" to the national struggle and who had contempt for national independence and sovereignty.Lenin said :