PCm Italy on Catalonia – Some Notes and Instruments for a Revolutionary and Class Stand To Guide the Internationalist Action and Solidarity. 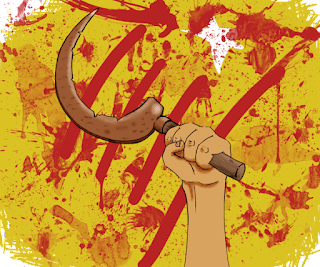 Catalonia – Some Notes and Instruments for a Revolutionary and Class Stand To Guide the Internationalist Action and Solidarity. PCm Italy.


In order to correctly contextualize the issue of Catalonia, in no way we can see only the aspirations for independence of a large part of the Catalan masses or the peculiar characteristics that can make Catalonia a nation.

This, however necessary, would not explain why here and now this contradiction has come to a fundamental point, it has so sharpened that to put for the Spanish State the alternative between a new-Francoist dictatorship on Catalonia with a sort of military occupation, or the national independence lead by a fraction of the Catalan national bourgeoisie and the middle bourgeoisie.

Marx and Engels taught us that we must go beyond this, we have to identify the existing nexus between the development of the bourgeoisie in the Spanish State and in Catalonia and the economic and social conditions that are the ground of the current sharpening clash.

It is therefore impossible to properly frame the issue without considering the economic and global crisis, the inter-imperialistic contradictions and the role of the Spanish State, within the scenario of a Europe under the German leadership and not only.

A first point that needs to be noted is that the aspiration to be established as nation and to assert the nation's factor is first and foremost a need of the bourgeoisie, particularly in situations within imperialist countries. It is the bourgeoisie that strives to develop economically, progressively breaking obstacles and barriers, and demands a territorial unity to lash the working masses and the progressive mass movement to its cart.

In the case of Catalonia, the problem is not so much the feudal residuals, but the rule of the Spanish State which contains in itself a "feudal" fraction, i.e. the monarchy and post Francoism which, while not being feudalism in the strict sense, plays a role of obstacle and brake for the development of the Catalan bourgeoisie.

Another element, which is always common in national issues and in Spain in particular, is the weight of the organization of the Church, that in Spain is the Vatican, the Roman Curia which, as it had firmly taken side with Franco, now firmly takes side with the Spanish monarchy and the Spanish State, and therefore interacts, feeds the aspiration for independence of Catalonia.

Another necessary element for the analysis of the contradiction in Catalonia is, as Marx and Engels taught us, the deep study of the existing nexus between the national issue and the development of the workers' movement.

Here our point of reference can only be that of France in 1848; that is to say, in Catalonia we are seeing an imperialist rule on an oppressed people of the third world, but a situation in which Catalonia itself is a capitalist country, not completed in terms of existing as autonomous nation. The necessary entrance of the working class in this contention requires it to fall into the field as an autonomous force in the struggle for political power.

The need for the proletariat to enter the field in the current struggle in Catalonia is within a precise definition and a precise limitation, starting from what Marx and Engels stated in the Manifesto: “The working men have no country. We cannot take from them what they have not got. Since the proletariat must first of all acquire political supremacy, must rise to be the leading class of the nation, must constitute itself the nation, it is so far, itself national, though not in the bourgeois sense of the word.”

Thus, it is evident that the proletariat in Catalonia is interested in a Catalan nation as a ground for the seizure of political power; and in this sense, even in the current clash, its being on the side of the independence for Catalonia is radically different from that of the bourgeoisie.

In Catalonia too, the proletariat must be aware that a Catalonia in the hands of the bourgeoisie is not their country, it would be the homeland of the bourgeoisie and the strata of middle and petty bourgeoisie allied, and therefore also in such a Catalonia, also in this struggle for independence the working class must conduct its struggle on the trade union and economic fronts, as on all fronts, to topple the current ruling class.

Even within the struggle for the independence of Catalonia, the working class is internationalist and aims at a society in which the economy is organized on a global scale and where not only the exploitation of a nation by another but the antagonism of the nations as such disappears, because these exploitation and antagonism are always characteristic of the capitalist and imperialist economies.

The working class addresses the national issue as a class struggling for the political power, taking on itself all the problems of national life and, in the case of Catalonia, the issue of independence. But this is not a struggle apart, but an integral part of the more general struggle to seize the political power and for the emancipation of the proletariat. (see Marx on Italy/Austria, letter to Laube, May 1848, quoted on "Marxism and national and colonial question",Stalin)

The working class - as Marx and Engels taught us - takes part in national struggles, as in the case of Catalonia, not only as a social question but as a matter of democracy. Indeed, the referendum and the right to declare the independence of Catalonia, are democratic issues, supported by a fraction of the bourgeoisie itself.

It is clear - and Marx and Engels taught us - that the position of the communists and the working class can not be the same of the false communists, who disregard or even oppose the national issue of Catalonia, taking with socialist arguments the side of the Spanish State.

The struggle of the working class develops better in a situation in which there is not the oppression of one nation on another, also, in the concrete case, in an imperialist country.

It is important to mention the quotation of Marx and Engels of 1849 on the NRZ (quoted in Marxism and the national and colonial question, Stalin), where they point out that in Italian contention, Italian independence could be lost not so much because of the military power of Austria as for the cowardice of Piedmontese monarchy.

We can and will compare that with the attitude of the current premier Puigdemont in Catalonia.

This is also important to grasp the substance of Marx's and Engels's point, who did not merely uphold the class action as an autonomous force but also called to draw its conclusions in the conflict "The mass insurrection, revolutionary war, guerrillas everywhere are the only means with which a small people can win a bigger one and with which a weaker army can cope with a stronger and better organized army."

If the proletariat as autonomous class comes into the field and takes these as the means to deal with the contention in Catalonia, it is likely that the bourgeois fraction currently leading the movement "rather than alliance with the people will prefer to broker the peace with its worst enemy."

Why is this important? Because it can be the opportunity to open the way and prepare the ground for the struggle for the proletarian power in Catalonia, for a socialist Catalonia.

In essence, in a developed capitalist society, and Catalonia is so, even in front of the national oppression by the Spanish State, the workers have no country, but in such a contention they take part and side to advance in the national dimension of Catalonia the struggle for the liberation of the working class, which excludes any oppression and exploitation of a nation by another.

This position is different from the bourgeois nationalism, that aims to continue oppressing the working class and the masses in a national context.

Again, considering the situation in Catalonia, emerges the need for communists who want to lead the working class as an autonomous force to resolutely fight both the right opportunism and the "left" opportunism.

The latter distance the working class from the liberation struggle in Catalonia, leaving the field free for the bourgeoisie and contributing to keep this national struggle in the camp of the inter-bourgeois contradictions.

They both break in fact the unity of the working class, that right in the situation of the Catalan crisis, would have all the opportunity to get concrete and weigh on the Spanish State and in Catalonia, and then achieve the goals of proletarian power and socialism.

At the same time, it is absolutely necessary in the current struggle for the national independence of Catalonia not to allow room it in any way to a position considering Catalonia something different from a developed capitalist country.

This would give a side to a view of Catalonia as a proletarian nation because it is oppressed, which is always a characteristic of the bourgeoisie and its reactionary wing.

Lenin teaches us that the if communists today give up the immediate and decided struggle for the democratic issue of the independence of Catalonia, they will play the game of the bourgeoisie, both in the Spanish State and in Catalonia itself.

In the Spanish state, because they weaken the progressive struggle for the independence of Catalonia, which without the role and participation of the working class can not win; in Catalonia, because they leave the bourgeoisie free to lash the masses to its cart.

On the contrary, the role and participation of the working class will allow to formulate and implement the claim independence of Catalonia in a revolutionary and non-reformist way, and to open the way, we repeat, to a socialist Catalonia.

For this reason, even in front of the current sharpening of the contradiction between the Spanish State, led by the Rajoy’s government, supported in various forms by the other parliamentary parties in Spain, and the Catalan government of Puigdemont, we should not be deceived by the slogans of bourgeoisies; these tend or sooner or later to settle or line up behind other imperialist powers to achieve their goals

PS The Highlighting in text is done by DCS

The statement of the Russian Maoist Party on Catalonia: http://maoism.ru/en/5792