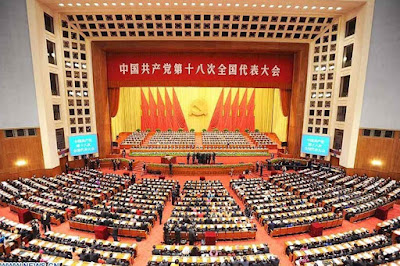 "We must hold the line for social control, eliminate all destabilizing factors, hold the line for cyber security and resolutely crack down on political rumors and harmful news," Cai said spoken like a elite confucian communist.

This would constitute the largest-ever turnover of military elite in the history of the People’s Republic of China (PRC).Most significantly, it appears that only 17 percent (7 out of 41) of military leaders with full membership on the 18th Central Committee will retain their seats.

Democracy and Class Struggle have long identified that a strategic United States goal was to bring the Chinese Military more under control of China's new bourgeois class as the PLA was a source of Nationalism and new variants of Maoism - the new Party Congress seems to be achieving that aim under the guise of modernization .

This is not only reflected in military reorganization but also in the new bourgeois policy on North Korea which prioritizes bourgeois monetary trade policies and not Chinese strategic interest in North Asia while purging old comrades who uphold proletarian internationalism rather than bourgeois nationalism.