Turkey: What happened on 15th July : We will not surrender to AKP Fascism 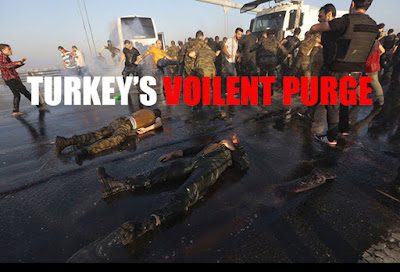 What happened on 15th July?

We will not surrender to AKP fascism!

Nor can the people surrender to the AKP declaration of a state of emergency!

On the night of 15th July, the clash between imperialism’s two puppets resulted in a coup attempt and since it was suppressed, a show of strength by the AKP.

The roots of the coup go back to 2012 and are a result of the power struggle between the AKP and Fethullah Gülen, who for a time was ensconced within the AKP. Both are collaborators with imperialism, both exploit the Islamic feelings of the people and both groups collaborated up to 2012 and deepened the exploitation of the peoples of Turkey.

The source of the clash between the two is who will profit more from turning the wheel of exploitation!

For this reason all the talk in the media about democracy is nothing but lies!

Recep Tayyip Erdogan for that matter cannot be anointed as some apostle of democracy since the coup attempt. Since the day he came to power, the blood of every one among our people murdered, tortured in the prisons, shot dead in their homes is on his hands!

And the chief responsibility for the massacres in Kurdistan lies with none other than President Recep Tayyip Erdogan.

They experienced the 1980 coup and know very well that a people that resisted this coup and was massacred and that the AKP which was “elected” and brought to power with the support of imperialism did nothing to investigate the 1980 coup.

And even in the decisions taken after 15th July there are no moves to investigate the 1980 junta.

In private teaching establishments, 21,000 teachers have had their teaching licences revoked.
In both central and provincial organisations of the Interior Ministry, 8,777 personnel have been dismissed from duty...

The resignation of 1,577 deans has been demanded in YÖK (translator’s note: Higher Education Council, itself a state control body in higher education created after the 1980 coup).
4 university rectors have been detained!

And after a ministerial meeting on July 20, a three-month state of emergency has been declared!
So, in purges throughout Turkey, bans on going out into the street, executions on the street in broad daylight, bans on publication, searches, the closing of associations, and CONTROL and BANS of every kind of film, song, poem and book are being LEGALISED!

All these decisions and practices differ in no way from the 12th September (1980) junta!

We do not recognise the AKP state of emergency declaration!

We will not surrender to fascism!!