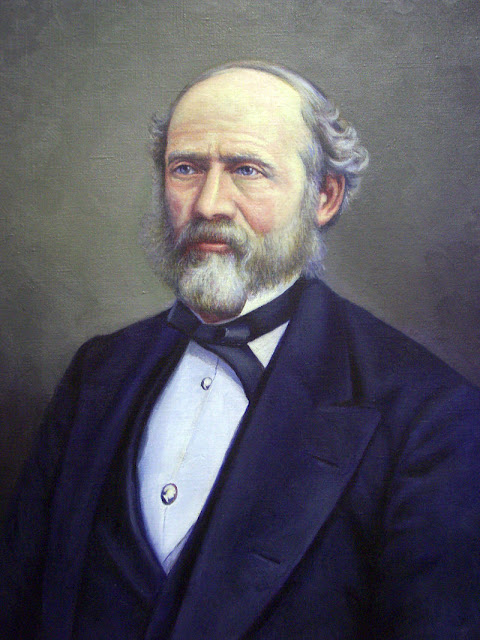 According to Herbert Marshall Lloyd, an attorney and editor of Lewis Henry Morgan's works, Lewis was descended from James Morgan, brother of Miles, who were Welsh pioneers of Connecticut and Springfield, Massachusetts, respectively. Various sources record that the three sons of William Morgan of Llandaff, Glamorganshire, took passage for Boston in 1636. From there Miles went to Springfield, James to New London, Connecticut and John Morgan to Virginia. Lloyd writes, "From these two brothers [James and Miles] all the Morgans prominent in the annals of New York and New England are believed to be descended." The Morgans to which he refers played a critical part in the foundation of the colonies. During the American Revolutionary War, they were Continentals. Immediately after the war, the Connecticut line, along with many other land-hungry Yankees, migrated into New York State. Following the United States' victory against the British, the new government forced the latter's Iroquois allies to cede most of their traditional lands in New York and Pennsylvania to the US. New York made 5 million of acres available for public sale. In addition, the US government granted some plots in western New York to Revolutionary veterans as compensation for their service in the war.

"They are not dead who live in the hearts they leave behind." -Tuscarora Tribe


“No soldiers, no gendarmes or police, no nobles, kings, regents, prefects, or judges, no prisons, no lawsuits - and everything takes its orderly course. All quarrels and disputes are settled by the whole of the community affected, by the gens or the tribe, or by the gentes among themselves; only as an extreme and exceptional measure is blood revenge threatened-and our capital punishment is nothing but blood revenge in a civilized form, with all the advantages and drawbacks of civilization.

Although there were many more matters to be settled in common than today - the household is maintained by a number of families in common, and is communistic, the land belongs to the tribe, only the small gardens are allotted provisionally to the households - yet there is no need for even a trace of our complicated administrative apparatus with all its ramifications. The decisions are taken by those concerned, and in most cases everything has been already settled by the custom of centuries.

There cannot be any poor or needy - the communal household and the gens know their responsibilities towards the old, the sick, and those disabled in war. All are equal and free - the women included. There is no place yet for slaves, nor, as a rule, for the subjugation of other tribes.”

Friedrich Engels, The Origin of the Family, Private Property and the State