France : Against the rise of fascism, let us prepare the people’s war! 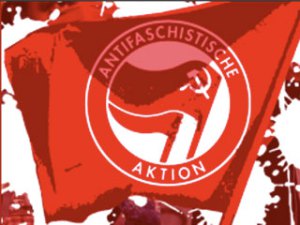 The murder of Clément Méric* by a far-right gang, the dismantlement of migrants’ settlements, the rise of islamophobia, of anti-Roma hatred, of antisemitism, left-wing and right-wing parties aligning themselves more and more with the far-right which has rooted itself as a rising force in the election game… All these elements contribute to the majority of activists feeling compelled to admit that there is indeed a rise of fascism in France. It is easy to observe that this rise of fascism is not specific to France. If these elements make us feel this rise of fascism, if we want to fight fascism, we need more than good intentions: we need a clear and precise definition of what fascism is in order to be able to oppose to it an adapted strategy that will lead us to victory.

“The imperialist circles are trying to shift the whole burden of the crisis onto the shoulders of the working people. That is why they need fascism.” Georges Dimitrov, 1935.

Fascism historically emerged for the first time in the 1920’s and 1930’s. It has been clearly analyzed for the first time during the Seventh Congress of the Communist International based on the analysis of George Dimitrov. Fascism is there defined in a precise manner, here is its class character: fascism is the open terrorist dictatorship of finance capital. With capital not being able to govern by the traditional means of liberal democracy, the most reactionary fringe of capital seizes power of brutally imposes itself on the whole of society. This necessity for finance capital to take on the form of a terrorist dictatorship was also characterized by the presence of a strong workers’ movement, notably the proximity of the USSR. One of the characteristics of today’s forms of fascism is, as it happens, the absence of this revolutionary proletarian movement threatening capitalism. Fascism can therefore spread originally in today’s society.

How to fight fascism?

Armed with this materialist definition of fascism, we understand that fascism is inextricably linked to capitalism. Its purpose is to brutally maintain capitalism when it enters periods of important crises during which the social order is inevitably disrupted. A lesson must be learned from this: we cannot fight fascism while relying on one fringe of the bourgeoisie against another. Bourgeoisie can never be an ally in the struggle against fascism. The antifascist struggle is revolutionary in essence, because the only way to put an end to the fascist threat is to overthrow the bourgeoisie in order to put an end to capitalism.

From there, we understand that the struggle against fascism does not consist of massively voting against the Front National* during the elections while establishing a “republican front”. But to oppose fascism, there is a need to unite but no unity can be possible without principles, from where the necessity of a revolutionary antifascism, that is to say an antifascism that recognizes that we can only struggle against fascism while struggling against capitalism. This antifascist front does not express itself through the bourgoisie’s elections but in concretes struggles. It must unite the masses in all the areas of life, it must rally as largely as possible around a revolutionary strategy, be it the mobilization against repression and police brutality, women’s mobilization for their emancipation through a proletarian feminist front, the mobilization for housing, the mobilization for the proletarian youth, etc.

Antifascism cannot be limited to the confrontation between antifascists and far-right gangs. Antifascism must be above all a strong class unity with a revolutionary goal. In order to achieve this strong class unity, true antifascists must mobilize and organize the proletariat where it is to be found: that is to say in popular neighborhoods. Since the end of the 1980’s, with the formal end of the USSR, the confirmation of revisionism’s triumph in China and the collapse of the “people’s democracies”, we were witnesses to the drop of revolutionary and progressist ideas in France, notably with the end of the mass organizations of the revisionist Parti Communiste Français* in popular neighborhoods and factories. This organizational and cultural emptiness allowed the bourgeoisie to carry out numerous attacks against the proletariat. It is upon this ideological emptiness that reactionary ideas have been able to progress and that fascists have recently been able to launch reactionary mass mobilizations like the Manif Pour Tous*.

Therefore, it is only through a revolutionary project, while strengthening the class unity of the proletariat, that we will be able to efficiently struggle against the rise of fascism.

If we are talking about proletarian revolution, we need to know how to do it. It is not possible to create a revolutionary antifascist front without revolutionary strategy. Many people call themselves revolutionary today but only perceive revolution as something far away, like a “grand soir”* that could only be reached after a lengthy and pacific accumulation of forces. This insurrectionary strategy has been long considered inconsistent. By taking the revolution back to the Greek Calends, we open the door to a reformist drift and the illusions that come with it.

Revolution needs preparation. It is triggered and necessarily lasts some time. A revolution cannot happen without the tools to lead it. These tools are that Communist Party which unites the most ideologically and practically advanced elements of the proletariat, the Revolutionary Front which organizes the masses in all the areas of life, it is the organization of the masses by the masses with a revolutionary goal, and finally the Fighting Force which takes on the violent confrontation with the bourgeoisie that won’t give up its power. These three tools are developped at the same time but in an inegal manner. One of the roles of the Fighting Force is, at first and mainly, to make sure that our demonstrations are protected (unlike a regular “service d’ordre” preventing so-called illegal actions, but by protecting the whole of the demonstration against the police and the fascists) and to attack symbolic targets.

This strategy is what we call the strategy of the protracted people’s war. The people’s war opposes the imperialist war. Its goal is to accomplish a revolution by largely mobilizing the masses with the working class in the lead while combining all necessary tactics (violent, non-violent, legal, illegal, …) in order to take us to the next steps (from defense to offense via balance) leading to the overthrow of the bourgeois State.

It is not enough to say “violence is legitimate against the bourgeois State” to actually fight it, this violence needs to be organized within a clear strategy and is carried out within the mobilization of the masses, if the revolutionaries do not want to be cut off from them, isolated, and then crushed by the repression. We must congratulate, support, and systematize the struggling proletariat’s experiences of rupture from bourgeois legality, like the workers of Goodyear and Air France did. Such violent episodes of class struggle in our country, in which the 2005 suburbs revolt* is included, constitute what the people’s war will be able to develop on, they can’t be overestimated nor neglected: they are to be developed further and further!

Let us develop revolutionary and popular unity against fascism!

Let us prepare the people’s war, only solution against the rise of fascism!

* Clément Méric was a Paris-based antifascist activist who was murdered by fascists during a confrontation with a far-right gang on June 5th, 2013.
* The Front National (National Front) is France’s most prominent far-right political party and has been analyzed as being fascist in nature by many far-left organizations.
* The Parti Communiste Français (French Communist Party) used to be France’s most important left-wing political party during the first half of the 20th century. It turned revisionist and has suffered a progressive decline in membership and votes since the 1970’s. Today, it is only communist by name.
* The Manif Pour Tous (Demo For Everyone) was a 2013 French reactionary campaign, led by right-wing and traditionalist catholic organizations, aimed at pressuring the French government to abandon its “Mariage pour tous” (Marriage for everybody) project to legalize same-gender marriage. It led up to one million people in the streets at the heights of the mobilization, but was unsuccessful as the bill was validated in May 2013.
* The Grand Soir (Great Evening) is a French expression describing a spontaneous revolution.
* The 2005 French suburbs revolt was a nation-wide set of confrontations with police that lasted up to three weeks in popular neighborhoods after the death of two boys following a police chase in the Paris suburb. It led the State to declare a “state of emergency” on the national territory for the first time since the Algerian War of Independence (1961).