PUNJAB: OPPOSE POLICE ASSAULT ON PROTEST OF BKU UGRAHAN AND SUPPORT HEROIC RESISTANCE BY PEASANTRY ALL OVER PUNJAB LED BY BKU UGRAHAN BY HARSH THAKOR 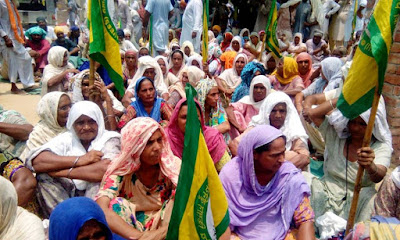 Yesterday the Punjab police in early morning foiled the 50th day of the protest of the landed peasantry led by BKU-Ugrahan.

At around 5 in the morning they broke through the peasant's houses.

The peasantry in retaliation launched heroic jams on roads in surrounding villages in Malwa district.An atmosphere was created of a torrent emerging with anger rising like a burning flame in the hearts of the peasntry.Inspite of protracted agitation the govt has been apathetic and not conceded to a single demand.

On top of it the police displayed their wrath by foiling the agitation.It was a spectacle witnessing the counter-resistance of the peasantry depicting the spirit of an army.,swarming the roads like bees. Their voice reverberated all over the state. Tribune News Service

Bathinda, July 12 The protest of farmers that entered 50th day today has stopped, at least for some days, without any panel meeting or fulfillment of their demands. After their long agitation that was held round the clock in front of the District Administrative Complex, now, the farmers have decided to return to their homes. Farmers from various areas of the state were supposed to reach here to join the ongoing protest. However, they were stopped at many places.

With the authorities paying no heed to their demands and agitation, they had again, for the third time, dropped their protest against the government in which thousands of farmers took part.

Earlier in January this year, they had announced to gherao Badal village, the native village of Chief Minister Parkash Singh Badal, twice over the demand of compensation for the damaged cotton crop and other demands.

Earlier, farmers planned to launch an agitation in Badal village on January 10, but cancelled it due to poor monsoon predictions. Later, they announced to stage a three-day protest in Badal village from January 22.

They staged a three-day protest from January 22 to 25, but While trying to gherao Badal village, they were not allowed by the police to cross Raike Kalan village in Bathinda, which is 3 km from Badal village of Muktsar district. However, farmers dropped their decision to protest in Badal village after being assured of a panel meeting with the Chief Minister within a week.

For 50 days, farmers from various districts of the Malwa region continued their protest in front of the District Administrative Complex. Various artistes, including theatre artistes and dhadhi jathas, had also performed here in their support. Besides, singer Jagsir Jeeda also supported them through his songs on farming.

Now, all farmer unions had decided to stage a protest jointly on July 27, 28 and 29 at the district-level across the state.

Earlier, the government had disbursed about Rs 20.26 crore as compensation among families of about 1,013 farmers who committed suicide till 2011. The compensation was based on a survey report conducted by three state-run universities in the past but later, farmers condemned the survey and demanded to conduct the survey again as they claimed that hundreds of suicides had not been covered in it. 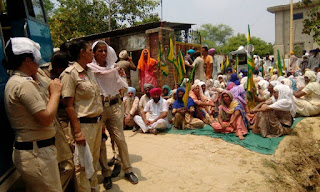 Shingara Singh Mann, Bathinda president of the BKU (Ekta Ugrahan) said: “Earlier, we decided not to end the agitation until our demands were met but now, we had decided to halt our agitation here. A district-level farmers’ protest would be held from July 27 to 29.

The authorities have failed to pay heed to our demands while today, the police, a puppet in the hands of government, had not allowed us to stage a state-level protest peacefully, which we feel is unconstitutional.”

He said: “Our constitution provides us the right to gather and stage protest or take out protest march peacefully but farmers who are agitating peacefully for the past many days were not allowed to stage a state-level protest despite they had announced to wind up their protest in Bathinda on Tuesday.”
The Sanjha Adhyapak Morcha that includes the Democratic Teachers Front, ETT Teachers Union, SSA – RMSA teacher Union and BEd Teacher Front also criticised the thrashing of farmers in Bathinda today, who wanted to stage a state-level protest.

Farmers are demanding a solution to the stray cattle problem, Rs 40,000 as compensation for the damaged wheat crop due to fire as a few farmers whose crop was burnt had committed suicide reportedly, round-the-clock electricity supply ahead of paddy season; quashing of false cases against the protesting farmers and compensation to those injured or dead during farmer agitations. They also demanded implementation of the Swaminathan report as farming is becoming a non-profitable profession.

They are also demanding waiving of debt of farmers and farm labourers who are unable to pay their loans; paying of compensation of Rs 5 lakh each immediately to suicide victim families; survey of suicides from 1990 onwards; release of motor connections to farmers on government expenses; full compensation of Rs 40,000 to farmers who faced damage to the cotton crop following the whitefly attack and making laws in favour of them instead of corporate houses or arhtiyas.


Bathinda, July 12 Over 200 farmers in Bathinda district were rounded up and later released by the police today. These farmers were on their way to Bathinda city to join an agitation that entered its 50th day today in front of the district administrative complex. Farmers alleged that the police resorted to lathi-charge, leaving several farmers injured. The police denied the charge.

In Rampura block, farmers planned to gather at a local gurdwara to march together towards the protest site in the city, but after being prevented by the police to do so, they blocked the main Chandigarh-Bathinda road from 1 pm to 5.30 pm.

Similarly, farmers held protests on the Moga-Barnala road near Pakho Kainchiyan, Sangrur-Talwani road, Bibiwanla Chowk and Goniana road against the police and administration for not allowing them to stage a peaceful, collective protest in Bathinda.

Shingara Singh Mann, president of the BKU Ugraha, Bathinda, said, “Several farmers suffered mild injuries after the police cane-charged them. Above 250 farmers from different places were rounded up. We had only planned to stage a state-level protest and announce our further decision to stage a protest on July 27, 28 and 29 at the district level, but the police in an undemocratic way prevented us from doing so.”

Bathinda SSP Swapan Sharma said, “Around 150 farmers were detained but released later in the evening. Neither was there any lathi-charge nor was any farmer thrashed.”
Farmers block Moga-Barnala highway

Moga: Hundreds of farmers, who were heading for Bathinda to participate in a stir against the SAD-BJP government, were stopped by the police at Saidoke village on Tuesday. A group of over 200 farmers jumped over the police barricades and sat on a dharna on the Saidoke-Bhagike road blocking the traffic till the filing of this report. TNS
Posted by nickglais on 7/13/2016 03:44:00 AM