HARSH THAKOR : ONE OF THE GREATEST EVER ASSEMBLES OF THE LANDLESS DALIT PEASANTRY TOOK PLACE ON JULY 20TH IN SANGRUR IN PUNJAB. 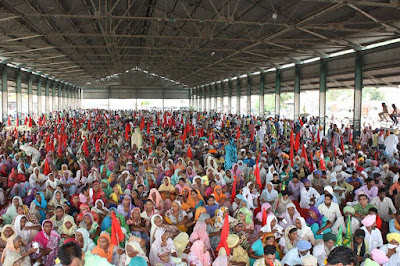 RED SALUTES TO ZAMEEN PRAPTI SANGHARSH COMMITEE RALLY IN SANGRUR WHERE A  STREAM WAS TURNED INTO AN OCEAN.

ONE OF THE GREATEST EVER ASSEMBLES OF THE LANDLESS DALIT PEASANTRY TOOK PLACE ON JULY 20TH IN SANGRUR IN PUNJAB.

History was made in sangrur on July 20th in Punjab which staged one if the greatest gatherings of Dalit agricultural workers ever in the history of India.

It was like witnessing a hurricane or a candlelight turning into a bonfire or several streams converging into an ocean.

I was privileged to participate in one of the greatest ever gatherings in the revolutionary movement of Punjab.

A Spark was turned into a prairie fire and the market in Sangrur looked like a bonfire.An inspiration to the whole world today .Rights of 1/3 right in panchayat ,release of NBS Secretary Longowal and many Zpsc activists were raised. Tribute to painstaking work of NBS and PSU as well as ZPSC. 80 percent of participants were Dalits.out of 10000.

History was made today in one of the best ever protests for the Dalit community in the history of India.Such was the spirit within the participants that it looked as though they were illuminating a huge red torch.

ZPSC and Kitri Kisan Union held a rally and surrounded the DC office in sangrur. Due the the pressure of organization civil administration arranged a meeting with CM Prakas Singh Badal tomorrow in Barnala.

ZPSC said there demands are not met then , they will launch a state wide stir. And ZPSC will occupy the Panchayaati Zammens of their share. And Badal's Sanghat Darshan will be opposed in villages and he have to run away from villages. 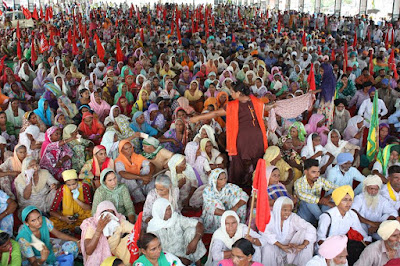 And the Crop that was sown by big land owners on Panchatati zameen , the land belongs to Dalits will be uprooted. And possessing of land that belongs to dalits will be taken. And indefinite Dharna will be started in front of DC office.

Above all it boosted the morale of the dalit landless comunity of Punjab in gaining emancipation from bondage.The rally laid the grounding for a major lanndless dalit labourers movement all over the state.

The present ruling govt was compared with the regime of ruthless Moghul emperor Aurangzeb.After 3 hours at about 3.00 p.m the rally assembled to march towards the District Adminstration office and reached there in an hour.The participants expressed relentless fury at the stage.

The rally in addition to rights for 13rd in panchyat demanded that the remaining 2/3rd would go to peasants owning not more than 4 acres of land.Today generally the landed jat peasantry is antagonistic or hostile towards the dalit community not only because of inherent culture but because it wishes to extract it's labour.

The dalits now are more determined than ever in Sangrur to proclaim their rights and this rally has instilled greater political consciousness.

What was also heartening was that about half the participants were women whose spirit emblazoned the scenario.It's message could spread like wildfire all over the state and promote other district 's movements.

Today at 100.a.m the chief minister started looking at the demands.Further repression is expected in ares of struggle in villages in Sangrur and before the rally police attacked ,arrested and raided houses of ZPSC leaders.

Heartening that participants came from other districts of Punjab like Amritsar, Gurdaspur, Patiala,Jalandhar etc.

Repression will continue and the Dalit community and leaders have to be prepared to thwart attacks of landlords and politicians.full. Marks to CPI ml new democracy group whose mass organizations made a turning point in the history of movement I spoke to convenor mukesh auladh today of the zpsc and he was very positive await cooperation and support worldwide .