From March 15-17th Chandigarh ,the capital of Punjab witnessed it's 1st ever dharna of agricultural labourers in dusera maidan in phase Around 6000 people participated.from 8 landless labourers organizations.

I was present at the gathering which comprised of around 6000 agricultural labourers.The strongest participant was the Punjab Khet Mazdur union which mobilised around 800 people.

Next was the All India Khet Mazdor Sabha of the C.P.I with around 700 participants.

The speakers voiced the demands of

1.giving rs 500 minumum wage to the agricultural labourers who today get around rs 250 for daily work

2.for implementation of the land act in 1972 which ensued 17 acres of land to every labourer which has not been implemented till today.

3.For giving work all the year around 365 days instead of 100 days like today.

4.For distribution of 5 malas of land to every agricultural labourers .A mala comprises around 272 ft of land.

5.Compensation to all families of suicide victims

The author was impressed with the enthusiasm of participants particularly when all the organizations activists were marching towards the secretariat.Slogans were given with the power of thunder against the oppressive Modi govt and the Akali Dal led by Badal.

The police blockaded them and prevented the rally from passing the secretariat's office.It was pleasing to see the moral support for the dhrna by leading activists of the B.K.U(Ugrahan) ,an organization of the landed peasntry.

The most important demand raised was for the distribution of land with abundant land lying vacant.The venue of the dharna resembled a huge red light shimmering with tents of the various participating groups . On the final day the state govt.replied that it would redress the demands by the end of the month.The blocking of the rally preventing it from reaching the assembly headquarters in Chandigarh was significant.

Also the unity of so many mass organizations of different trends had great significance,demarcating the mass organiztion from the party.The condition of agricultural labourers in Punjab is deplorable be it their wages,working conditions or employment.photos below.

The author spoke to Laxman Singh Sewewala and to Mintu Singh of Pendu Mazdoor Union. Sewewala stressed on the importance of unity with the landed peasantry which to him still had immmense possibility.

To me caste is still a very importnat consideration when you see the light of the dalit community.It is still very challlenging to wedge the gap between the dalits and landed castes. 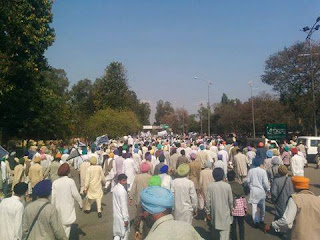 On 18th March the Mohali part of Chandigarh next to the Ambi Gurudwara in phase 8 area witnessed a massive gathering of the landed peasantry organized by the B.K.U(Dakaunda)

Aroung 8000 peasants participated in a big march to the headquarters of the central BKU (Ugrahan) with B.K.U(Dakaunda) but were blocked near the secretariat by the police forces.

The marchers vehemently raised their voice fot the scrapping of all debts.

I was present at the gathering and first hand heard the vociferous demands of the peasantry.

Slogans were raised against the apathy of the ruling classes.

Sadly around 70 peasants were subjected to excruicating injuries by the authorities and were hospitalized..The venue of the march resembled a bonfire where the peasants faces literally told the story.Secretary of B.K.U(Dakaunda) made the main speech highlighting the state's negligence of the conditions of the peasantry

He demanded the cancellation of debts,compensation to families of all suicide victims, implementation of the Swaminathan Commision and the B.D.S.scheme which promised power supply to the peasants.

Powerworks  of at least rs 1200 horsepower  2.5 and a half acres  of land on which agricultural motors would be awarded compensation for all damages to crops during heavy rains.

The agitation was an impressive effort by one of the leading organizations of landed peasantry.

The bourgeois media hardly highlighted the event with good coverage only in Hindi and punjabi papers. The blocking of rally and attack on peasants expresses the true nature of democracy here.
Posted by nickglais on 3/19/2016 03:21:00 AM