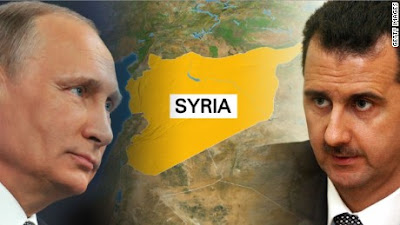 With this move Putin hopes that this would be a good motivation for launching negotiations between political forces in the country.

While being at a meeting with Defense Minister Sergey Shoigu and Foreign Minister Sergey Lavrov, Putin stated that the tasks set to the defense ministry are generally fulfilled and that´s the main reason why he ordered the withdrawal of most of Russian military forces from Syria, starting tomorrow.

“Besides, our military, soldiers and officers demonstrated professionalism, teamwork and ability to organize combat work far away from their territory, having no common borders with the theater of war,” Putin said.

Assad, however, has announced that parliament elections in Syria will go ahead next month according to schedule. A Syrian official, Hisham al-Shaar, said the elections will be held only in areas under government control and there will be no polling stations in Syrian embassies abroad or in refugee camps.

On Monday, as the election campaign officially kicked off, streets in the capital Damascus were festooned with electoral banners and posters of hundreds of government-approved candidates

Analysis from US Imperialism's mouthpiece STRATFOR

With their actions in Syria thus far, the Russians have showcased their improved combat capabilities and some new, previously unused weapons, which will likely contribute to important arms sales, including some to Iran. Russia has also largely achieved its goal of weakening the Islamic State, though the Russian contribution against the terrorist group is just a part of a much broader, multilateral effort that includes the U.S.-led coalition, rebel forces and the majority Kurdish Syrian Democratic Forces. All in all, the Islamic State may not be entirely defeated, but its forces in Syria and Iraq are much weaker than they were five months ago.