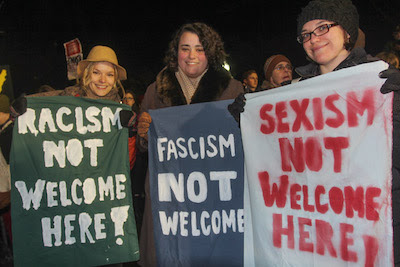 Fascism: I sometimes fear...
"I sometimes fear that
people think that fascism arrives in fancy dress
worn by grotesques and monsters
as played out in endless re-runs of the Nazis.

Fascism arrives as your friend.
It will restore your honour,
make you feel proud,
protect your house,
give you a job,
clean up the neighbourhood,
remind you of how great you once were,
clear out the venal and the corrupt,
remove anything you feel is unlike you...

Ilya Sheyman, executive director of MoveOn.org Political Action, responded to news of the postponement of Donald Trump’s rally in Chicago on Friday:
“Mr. Trump and the Republican leaders who support him and his hate-filled rhetoric should be on notice after tonight’s events. These protests are a direct result of the violence that has occurred at Trump rallies and that has been encouraged by Trump himself from the stage. Our country is better than the shameful, dangerous, and bigoted rhetoric that has been the hallmark of the Trump campaign. To all of those who took to the streets of Chicago, we say thank you for standing up and saying enough is enough. To Donald Trump, and the GOP, we say, welcome to the general election. Trump and those who peddle hate and incite violence have no place in our politics and most certainly do not belong in the White House.” 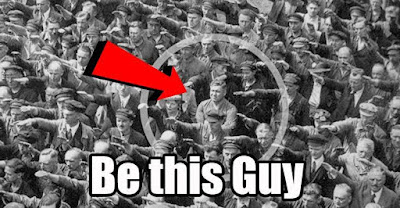 If we could learn to look instead of gawking,
We'd see the horror in the heart of farce,
If only we could act instead of talking,
We wouldnt always end up on our arse.
This was the thing that nearly has us mastered;
Dont rejoyce in his defeat, you men!
Although the world stood up and stopped the bastard,
The bitch that bore him is in heat again.
Bertolt Brecht (1898 - 1956)

You should read this at REVCOM:

The solution is BA's New Synthesis of Communism.

Right now, though, some things that CAN and MUST be said about what the rise of Trump, even now, means for those working for revolution:

It means, most of all, getting out to people that there is a REAL and NECESSARY alternative to all of this: revolution. This means, right now and in the coming months, seizing on the highly charged atmosphere to get BA out to millions—his way of understanding the world, the vision of a new society he’s developed (concretized in the Constitution for the New Socialist Republic in North America), and the strategy to accomplish this. And this includes, as part of this, going out to those attracted to Sanders’ message and winning them to see that what we face cannot be dealt with in the terms Sanders is proposing—this is, as we said recently, an illusion... a “wisp of painless progress.”

It means preparing ourselves, the movement for revolution, and the people to deal with the much more repressive atmosphere already being unleashed, and the heightened repressive measures and actions that now loom with the ascendancy of Trump (and which, whatever happens to Trump, his candidacy is creating public opinion and organization for). This means very much building a wall of support around BA—based on people understanding what he is all about and coming to respect and love him on that basis.