Indian Workers’ Association, Great Britain continues to stand firmly with Jawaharlal Nehru University (JNU) and strongly condemns the attempts by the Indian state and the Hindutva forces to stifle the voices of democratic dissent, disagreement and discourse in the campuses. 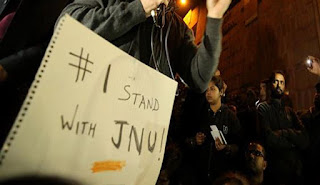 Justice for Rohit Vemula and enactment of Rohit Act!!'

Complete withdrawal of Army from Kashmir, North-eastern states and Chhattisgarh!!

Justice for Soni Sori! Stop assaults on journalists, activists and NGOs in Chhattisgarh!

Indian Workers’ Association, Great Britain continues to stand firmly with Jawaharlal Nehru University (JNU) and strongly condemns the attempts by the Indian state and the Hindutva forces to stifle the voices of democratic dissent, disagreement and discourse in the campuses.

We congratulate the students and the faculty for standing unitedly and firmly at a time when assaults on democratic rights is taking place across India on various sections of the people.

We thank and congratulate the students, faculty and the staff of various educational institutions from within India such as Jadhavpur University, Hyderabad Central University, IITs, IIMs, FTII and IIMC for standing with the JNU.

We also thank hundreds of academicians such as Noam Chomsky from universities across the globe, including Columbia, Harvard, Yale, Cambridge, Oxford and Warwick for their outpouring solidarity in support of the JNU.

We also thank the legal team who volunteered to act as lawyers for the six JNU students including Kanhaiya, Omar Khalid and Anirban Bhattacharya and also for successfully getting the JNU students’ Union president Kanhaiya out on interim bail.

It demands immediate release of Omar Khalid and Anirban Bhattacharya from prison.

On a similar note, IWA Great Britain strongly condemns the arrest of Prof Geelani, Delhi University, barely three days after the arrest of JNUSU president Kanhaiya Kumar. While the six JNU students have been charged with sedition over an event on JNU campus against hanging of Afzal Guru, Prof Geelani is facing the same charges over an event at the Press Club on the same issue. SAR Geelani’s biggest crime is that he is a Kashmiri Muslim and questioned the capital punishment given to Afzal Guru. IWA, GB demands his unconditional release from detention.

IWA, GB likes to remind that yet another Delhi University professor, GN Saibaba, who was incarcerated in Nagpur jail for 14 months, was sent back to prison again in the last week of January, within 6 months after being released on bail based on his deteriorating health conditions. He was charged under the colonial Sedition Act and the UAPA.

The only fault of this 90% disabled wheelchair bound professor was that he questioned the ongoing military assault of the government, code named ‘Operation Green Hunt’ on the poorest of the poor - the Adivasis of Chhattisgarh, Orissa and Jharkhand.

He also questioned signing of hundreds of secretive mining and infrastructure contracts (MoUs) by the central and state governments with multinational corporations, who are looting the natural resources, grabbing thousands of acres of land of the indigenous people and destroying their livelihood.

In a related development, a contempt notice was issued against Arundhati Roy by High Court Justice Arun Chaudhari in December for her views published in Outlook magazine on the arrest of Dr GNSaibaba and subsequent rejection of his bail plea early last year.

We cannot see what is happening in the JNU or Rohit Vemula’s institutional murder in the University of Hyderabad in isolation from what has been happening elsewhere in India and across the world.

As the global economic crisis is deepening, the corporations are bringing extreme right-wing forces to power in many countries, which are intensifying their assaults on the democratic and constitutional rights of the people, including students.

Historically, students have been in the forefront – may it be the anti-war campaign against the US war on Vietnam or against the Chinese government’s assault at Tiananmen Square. On the 9th of March 2016, about half a million students and industrial workers jointly took to the streets in Paris and other cities around France, striking against President François Hollande’s proposed changes to the labour laws, which are seen as a major assault on workers’ rights.

The demonstrations shook the French rulers, reminding them of the 2006 militant demonstrations of students and youth. From that perspective, the students in India have a huge responsibility in building a democratic movement in India, resisting the ongoing assaults by the pro-corporate Hindutva government.

JNU has brought some age-old important issues to the forefront once again for debate. One of them is the right to self-determination of nationalities and the question of Kashmir Contrary to what the Sangh Parivar thinks, India is not just one monolithic nation. India is diverse with various nationalities, regions, tribes and cultures. In political terms India is a union of several nationalities, which are still struggling to evolve as full-fledged nations. The right to self-determination of oppressed nationalities such as Nagas, Manipuris, Mizos and Assames is being crushed under the iron heels of the armed forces.

Though there are name-sake State governments, Kashmir and north-eastern states have always constantly been under military rule, with hundreds of thousands of armed forces being deployed there.

The pre-1947 promises made by the Indian National Congress (INC) to the people of various nationalities in India for a real federal democratic republic remained as broken promises, making India a prison-house of nationalities.

Another question is the Capital punishment and colonial repressive acts such as the notorious ‘Sedition Act’, which the British used on Bhagat Singh, Gandhi and Tilak. In addition to what they have inherited from the British, the Indian rulers have made innumerable draconian repressive laws such as AFSPA, TADA, POTA, NASA, MISA, UAPA, Chattisgarh Special Public Security Act and so on.

The same Government, which has taken away the non-NET fellowships and is rushing to sell-off our educational institutions to the World Trade Organisation (WTO), is on the other hand continuing its assault on the industrial working class by diluting the already weak labour laws, making it easy for the corporations to hire and fire workers.

The same fascist forces that are responsible for the massacres of thousands of monitories such as Muslim and Christians across the country are intensifying their assaults on thousands of villages in the mineral-rich forest areas of Chhattisgarh, Orissa, Jharkhand and Bihar with an intention of displacing millions of Advasis from their lands and homes for the benefit of foreign and domestic mining and heavy industry corporations. Attacks on Adivasi villages by armed forces are increasing.

Arrests, torture, rapes, burning of crops and homes, stealing their savings and poultry by armed forces have been going on as a routine for more than two decades. According to the reports of Home Ministry, there are over 1 lakh armed forces such as CRPF, BSF and ITBPF are deployed in South Chhattisgarh, making it the most-militarised zone in the entire country. Around two years ago Indian Army too was deployed in the guise of establishing a training school for the Army. The Indian Airforce is building airstrips there.

Indian jails are over-crowded, most of them being people from poor working class / rural background and political activists. According to 2013 prison statistics of National Crime Records Bureau (NCRB), published in Times of India (9th Nov 2013).

Chhattisgarh is the worst among any other state in India with 14,780 prisoners against the prison capacity of 5,850, which means a 252.6%. Most of them are adivasis imprisoned under false cases. 68% of them are undertrials and never produced before the court.

A day after being warned by Chhattisgarh police to vacate her home in a village near Jagadalpur, tribal leader Soni Sori was attacked by some ‘unidentified persons’, who threw a chemical on her face.

Our country is passing through a critical phase of history in terms of erosion of democratic rights and shrinking democratic space.

We appeal to the students and youth of India to stand in solidarity with other progressive sections of the society such as journalists, lawyers and teachers to build a democratic united front against the ongoing assaults by the fascist state. They should stand in solidarity with the peasants who are being driven to take their own lives and adivasis who are facing the joint assault of armed forces and multinational corporations. They should join forces with the industrial working class as the French students are doing. The interests of working class and peasants are not any different from those of the students, as majority of them come from poor peasant and working class families.

* Uphold the democratic values and fight to retain the rights achieved through democratic struggles.

* Freedom for all political prisoners.