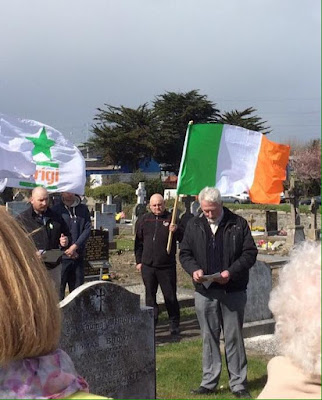 Fellow citizens in this centenary year as we commemorate the men and women of the 1916 Easter Rising the whole country is reflecting and debating its merits and division which provides us with an opportunity and responsibility as socialist republicans to express our view and analyse what effects the Rising has had on shaping and forming Irish society since.

No doubt this is and must be a work in progress but to make a few points, I believe are fundamental to our past present and the prosperity of our future. James Connolly said many interesting and prophetic statements;

“knowing our history is like a lamp to the feet of the Irish worker in the stormy paths he must travel”.

I started by addressing you as citizens, that is what we are as a result of our brave selfless men and women of the Easter Rebellion, a profound declaration, a free people in our own country and our charter of rights enshrined in the Proclamation, not aspirational but our entitlement as citizens which is still our goal to this day.

We’ve been laterally denied by British imperialists and home rulers and now by native and foreign vulture capitalists robbing our resources and subjecting us to be guarantors of their speculative losses in banking and property.

Prior to 1916 the objective was building resistance against British occupation and fighting for the hearts and minds of citizens against the mindset of British subjects. Connolly was to the fore in this thinking. He addressed it throughout his writings and had a profound influence on others around him. He believed any form of acceptance of subjection to kingship could easily be transferred to king of industry or commerce for that matter.

The awakening of the slave is the key to freedom. That sense of self worth, alive, thinking possibilities boundless, finding your voice, creative, imaginative never to return to the imposition of a slave. A free thinking people are a prerequisite to a free country.

This thinking did not sit well with the home rulers. Connolly said the home ruler nationalists agreed with the British that the Irish worker should be skint, that they were fighting over who got the biggest piece.

Others were also committing to a position at odds with the home rulers. Patrick Pearse in his last political essay in The Sovereign People wrote;

“A nation may go further and determine that all sources of wealth whatsoever are the property of the nation and that all surplus wealth shall go to the national treasury to be expended on national purposes rather than be accumulated by private persons”.

The 1911 Lockout in Wexford and the 1913 Lockout in Dublin had a great influence on the thinking of Joseph Mary Plunkett and Arthur Griffiths anti labour position brought about the resignation of Eamonn Ceannt from Sinn Fein.

Connolly addressing The Citizens Army for the last time said

“but if we should win hold on to your rifles because the volunteers may have a different goal; we are not out only for political liberty but economic liberty as well”.

Based on how the forces of oppression foreign and native were aligning I have no doubt there is validity in the claim that the British consulted with them during the executions and subsequently provided armoury for the counter revolution to protect their joint interests namely the denial of our citizens rights as defined in the Proclamation; the nation’s resources and wealth to be bestowed equally amongst all Irish citizens.

The same vulture capitalists that we are fighting in Moore Street today that are determined to demolish the 1916 Moore Street Terrace and battle site, our heritage and smother it and our history in concrete and erase it from history if they could. But not on our watch!

As citizens we occupied the terrace for 4 days and came out to allow due process as it was not forthcoming and works continued. We made a decision and served a citizens injunction.

We blockaded front and rear for 38 days preventing any further demolition or destruction until a court order ruled that all works were to cease.

Maybe it’s time the citizens exercise civil disobedience and injunctions across other issues where appropriate; homelessness, health, education, housing, water etc because whatever the composition of the committee in Leinster House their loyalty and duty is first to protect the market and the 1%!

” A free nation must have full power to alter, amend or abolish or modify the laws under which the property of its citizens is held in obedience to the demand of its citizens. Every free nation has that power. Ireland does not” –James Connolly.