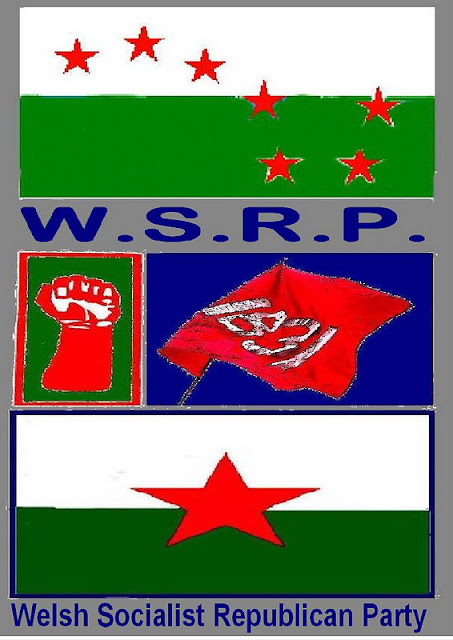 Leanne Wood of Plaid Cymru, a woman from the Rhondda, is now primed to play the role that Neil Kinnock played before in Welsh Labour Party History.

By winning the leadership of Plaid Cymru Leanne Wood is the new Kinnockio. That role is to deceive people into believing that Plaid Cymru is something which it is not.

Wales is in accelerated economic decline, being the second poorest country in Western Europe after Portugal. The fact is disguised by taking the United Kingdom as a whole, thus glossing over the dire situation in Wales. The per capita income in Wales compares unfavourably with Greece.

The political and business establishment know they are in deep crisis and that widespread misery in Wales will lead to mass resistance sooner or later.

Leanne Wood taking the leadership of Plaid Cymru will spread and perpetuate the illusion that Plaid Cymru is or can become a vehicle for a progressive, socialist and republican movement, that Plaid Cymru can challenge the Westminster imposed austerities, take Wales out of the neo-imperialist wars in the middle east and elsewhere, and get rid of those imposters posing as the Prince and Princess of Wales.

Plaid Cymru cannot really do this, because it is at bottom the party that represents Welsh businessmen, and not the working people of Wales. Its call for an independent Wales inside the European Union only seeks to change one set of rulers from Westminster for another in Brussels, the pound for the Euro.

The essential link between national and class oppression was exposed in Ireland by James Connolly. In Wales, Gethin ap lestyn Gruffydd  is one of the few Welsh patriots that recognises that at root the national question in Wales is a class question.

Leanne Wood's leadership will deceive people for a while, but it is obvious that a new party is needed. One that can struggle for the working people of Wales in deeds and not just in words.

Leanne Wood by winning the Plaid Cymru Election is helping to spread the illusion that Plaid Cymru is indeed the long awaited Welsh Socialist Republican Party that Wales needs.

But this is a lie that has to be nailed, Plaid Cymru is a petty bourgeois cultural nationalist party that will betray the working class just like the Labour, Liberal or Tory parties in Wales have done and many people already know that in their hearts.

Plaid Cymru will dissipate all the revolutionary energy that the new great unrest will create unless we bring forth a genuine Welsh Socialist Republican Party.

Third Statement issued on May Day 2012

The Welsh Socialist Republicans believes the only class in Wales which is capable of leading Wales to the new democracy of autonomous self government in Wales is the working class. That is true Welsh Independence !

Plaid Cymru, the Labour Party and connecting with the people  Great Unrest Group 2012 observations on the Welsh Council Elections
Clearly the Labour Party in Wales connects better to the people because it is seen as the champion of class issues which are more important to most Welsh People than Welsh national issues.

Whether the Labour Party is a true champion of the working class is another issue, that is how they are perceived and perception is what bourgeois politics is all about.

Plaid Cymru is not seen as a working class party to champion working class issues, but has a party of cultural nationalists and until this perception is changed Plaid Cymru is condemned to the margins of politics and Welsh Independence will be a pipe dream.

Electing a leader from the valleys does not change the perception of Plaid Cymru only militant defense of the working class interests will.

How many Plaid Cymru councilors would not just vote against council cuts but risk going to prison to oppose cuts in Wales ?.

Has our comrade Gethin ap Gruffydd says they talk the talk but do not walk the walk.

In 1935  Phil  Abraham and 10 others in Blaina and Abertillery were send to prison for fighting the national assitance cuts by the then National Government following the Blaina Riot of 1935.

Phil Abraham’s talked the talk and walked the walk, and the National Government changed its policy of further cutting national assistance, fearful of full scale revolt in the Valleys of Wales.

Sweet talk from Leanne Wood will take Plaid Cymru nowhere, radical action in the sprit of Phil Abrahams will.

The task facing Welsh Socialist Republicans is to create a political movement where working class and national interests converge and become indistinguishable.

When the Welsh national party is recognized as a working class party we will have arrived on the political scene.

We have Wales to Win, we have a World to Win – Long Live the Great Unrest Group 2012 for a Welsh Socialist Republican Party.

'Plaid Cymru is a petty bourgeois cultural nationalist party' is a bit strong. I think it's a useful vehicle for debate and action, and has some very interesting ideas.

But all the best with the revolution, more political activity can only be applauded as long as it's not the fascist 'BNP'

the outcome from a new welsh socialist republican party will be what? marginalisation. siphoning off energies into a dead end. slapstick politics. empty gestures. macho posturing. self congratulation. irrelevancy. clearing out the left from plaid cymru and making it even more bourgois and more like the snp. no, we dont want to go there. fin.

Clearly we have upset you - that is a good thing -for the politics you describe is not our politics - it would more appropriately fit the fake socialism of Plaid Cymru.

One of the first campaigns we have participated in is the call for a Welsh Land Act,a serious attempt to bring the issue of Crown Lands in Wales and English aristocratic estates into the political life of Wales - it is a democratic demand so basic and so ignored by Plaid Cymru who in the advance guard of eco - colonialism with it's industrial scale windmilling of Wales.

Communities rather than corporates should be the bases for sound ecology - Plaid is not only with the corporates,some of it's leading members are the corporate Eco colonialists.

I am an Australian of Welsh heritage I lived in Bangor for acouple of years 1978-80 . I believe the Welsh Socialist Republican Party is 'spot on' .eg '....Communities rather than corporates should be the basis for sound ecology."It seems you have the dialectic of socialism and retention of national identity more accurately defined than most. It is aproblem yet to be solved in Australia...the cultural and economic imperialism via the USA.Ths has resulted in a 'aristocracy of labour' with the associated false consciosness of a 'bought off' society.Our immediate struggle is to gain independence and sovereignity