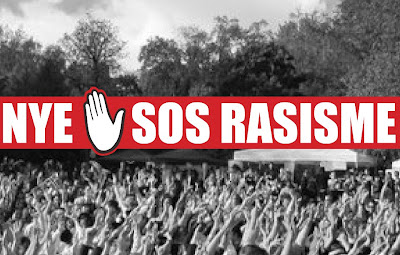 The office of SOS Rasisme in Haugesund (Southwestern Norway) has been a subject of vandalism. Three windows have been broken with stones.

Sometime between Saturday night and Sunday morning the office has been a subject of vandalism. Activist and treasurer Kjell Gunnar Larsen has the following answers to what has happened and what's the background of the vandalism.
What has happened?
When I came to the office on Monday at around 1130 I was met by a sad sight. Three large windows had been broken and glass and stones were spread a long way into the office. The police was oriented about the misdeed and has conducted a survey to secure evidence. They have also sent a requisition to a glazier who has taped the windows.
The police however chose not to contact us.
What do you think is the background for that it was exactly the SOS Rasisme office that was attacked?
For me as an active antiracist in this town for several years vandalism and threats from Nazis is not a new phenomenon, even though we have been saved for such attacks during the last couple of years.
The Norwegian daily Dagbladet has however run a hostile campaign against us now for two years where they have twisted and turned the truth and given place for anybody who has held a grudge against SOS Rasisme. These people have gotten a place in the paper whatever their motives have been and how fantastic their stories have been. Dagbladet has not given us the right to answer to these stories, thus we have not had an opportunity to come with our arguments in a fair way.
Do you mean that Dagbladet is to blame for the attack against the Haugesund office?
Of course I do not suspect that people employed in Dagbladet have thrown the stones. But this campaign against SOS Rasisme has of course had consequenses. They have run a campaign against us and created a witch hunt. They have created a climate where it is allowed to harass us. The breaking of windows is only a physical expression of this.
They have also put a lot of pressure on all of our fiscal supporters and politicians so that they can paralyze us economically, and several of the fiscal supporters and politicians have not been hard to ask.
We have been a guard dog against the inhuman asylum politics run by the government. We have consequently critizised the racism they have spread in order to get votes in the electoral campaign – whatever party it has been. This struggle has given us enemies. All these factors multiplied have lead to the central organs of SOS Rasisme have had to prioritize legal processes instead of working against racism and Nazism for two years now.
But we have no intentions to lay down and die. Around all of Norway our local branches are active in many ways. We are in the front line in the work against Nazis and against deportations of refugees who are in danger of being returned to torture and prosecution. The struggle against racism continues!

Democracy and Class Struggle says Dagbladet needs to be exposed in its campaign against SOS Rasisme has Dagbladet nonsense is what breeds Anders Breivik's - it is time to make the world aware of the irresponsibilty of Dagbladet and for them to to held to account for their sensationalism and provocations.
Posted by nickglais on 3/19/2012 12:32:00 PM