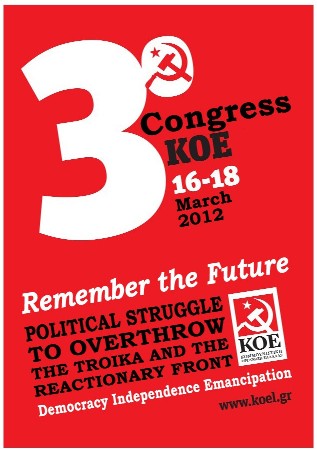 Communist Organization of Greece / KOE
Info from the Organizational Committee of the 3rd Congress:
- While the regime imposed on Greece by the IMF-EU-ECB troika and their local puppets attempts to liquidate the last remnants of democracy, sovereignty and independence…
- While this regime represents the transformation of Greece into a modern protectorate within Europe and threatens the very survival and the dignity of our people…
But also:
- While the rotten political system finds itself in a deep crisis and the popular masses develop a new conscience and look for a way out breaking with the reactionary establishment…
- While the new popular mass movement that has arisen advances its organization and continues the courageous and protracted political struggle against the regime and the troika…
…the Communist Organization of Greece / KOE holds its 3rd Congress.
The main objective of the 3rd Congress is for KOE to fulfill, in these difficult circumstances, the duty of contribution to the overthrow of the special regime and the demolition of the established political system, thus paving the way for political, economic, social way out for the country.
The issues addressed by the 3rd Congress are: a) the assessment of the 5-year period since the 2nd Congress, b) the estimations of KOE about the actual political situation and developments in Greece and internationally, and c) the general directions to be adopted for the next period. The internal debate is going on for the last two months with great participation, based on the documents proposed by the Resolutions’ Committee and enriched by many collective and individual contributions.
The works of our 3rd Congress will start on this Friday 16 March and will conclude on Sunday 18 March. Please send your written messages by Thursday 15 March.
Warmest comradely greetings!
Dear Comrades,
Democracy and Class Struggle in the British Isles sends solidarity greetings to our comrade brothers and sisters at your Congress in Greece on 16th - 18th March 2012.
We wish you a very successfull 3rd KOE Congress at this critical time for the Greek nation and people.
The fight of the Greek Working Class is the same fight against neo-liberalism and austerity has that of the British Working Class.
We issued a video through our March 26th Movement "Defend Greek Working People against Slanders of Media"  to expose the widesspread media lies in Britain about the people's struggle in Greece.
http://www.youtube.com/watch?v=jpXdQ-OgFxs

We will continue to battle the media lies about Greek working people in Britain.
Long Live the solidarity of the British and Greek working people.
Success to the KOE - Success to your Congress
Rebuild the International Communist Movement upon the principles of Marxism Leninism Maoism.
Long Live Marxism Leninism Maoism
Nickglais