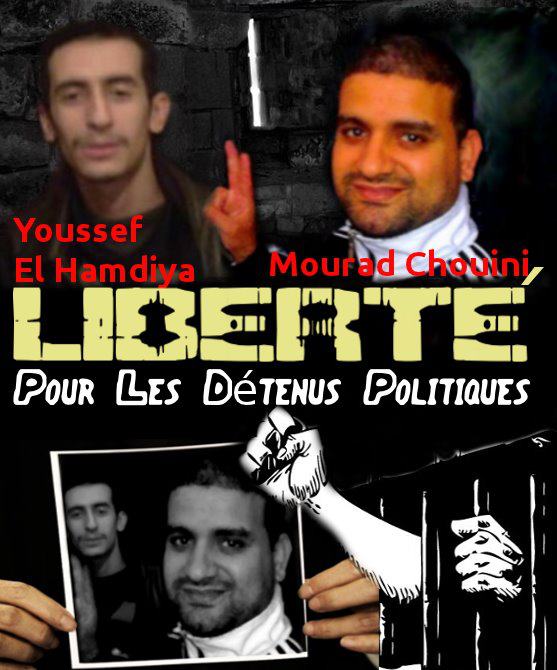 
This initiative comes as solidarity with the hunger-striking political prisoners in Taza, Fez and Errachidia, and as solidarity with heroic Rif uprising.
The two comrades call upon the glorious popular masses to widespread struggles as reply to widespread of suppression, and to persist and resist in such significant moment in the history of our people's struggles, in which toiler pepole's and political prisoner's struggles are mingled.


They also express their high heartedly red greeting to the hunger-strikers for their persistence and sacrifice, and express their unconditional support toward them in their battle which have reached high-score levels, and which have exposed the reactionary blood-thirty nature of the regime, crushing down all its guises.


Lets all act now in order to save hunger-strikers' lives!

Comrade Azzedine Eroussi has been on hunger strike for 90 days protesting treatment in prison and repression in Morocco
Embassy of the Kingdom of Morocco
49, Queens Gate Gardens
London  SW7 5NE
(nearest tube Gloucester Road - Piccadilly Line )
Protest between 5pm to 6.30 pm on 19th March 2012
We  demand to stop all torture in prisons.
Release all political prisoners.
End to solitary confinement,
End to all political disappearances
Meet the just demands of the of the hunger strikers
Protest supported by
Free Mumia Abul-Jamal Defence Campaign UK, The Pan-Afrikan Voice, The March 26th Movement, Democracy and Class Struggle.
Posted by nickglais on 3/17/2012 02:04:00 PM