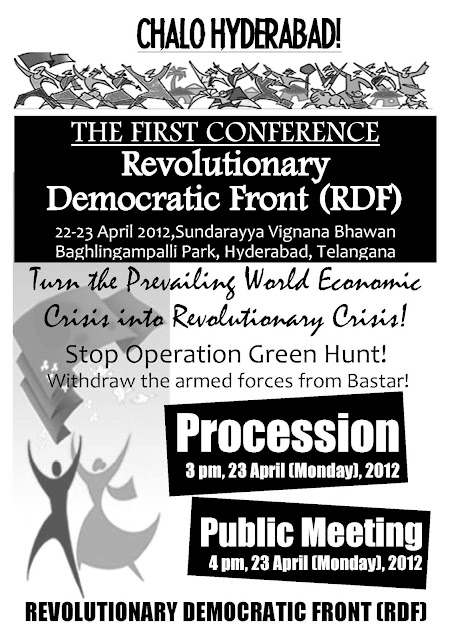 Revolutionary Democratic Front (RDF)
Friends,
The first Conference of the Revolutionary Democratic Front (RDF) is going to take place at a time when the imperialist forces and their props – the ruling classes of various colonial and semi-colonial countries – are going through an unprecedented economic depression resulting in a worldwide economic crisis, a condition which is of their own making. The reactionary Indian ruling classes, being agents of imperialism, have transferred the burden of the world economic crisis to the people of this country – the masses of the people who are already grappling with acute exploitation, poverty, unemployment and deprivation of the basic necessities of life. Their purchasing power has come down drastically. They have been denied the right over jal-jangal-zameen (water, forest and land resources) and other resources. Such conditions have generated disaffection amongst vast sections of people of the subcontinent manifested as a multitude of peoples’ struggles.
Despite every effort of the Indian state to hide the gravity of the crisis in which it is, the Indian economy has been severely shaken by the worldwide economic crisis due to its increasing dependence on the imperialist economy. The exploitative ruling classes, who never tire of making tall claims about outstanding ‘growth’ and ‘development’ riding on the fortunes of an export-oriented economy aided by imperialist globalisation, have lost their sleep over the present crisis. Those who used to wax eloquently of ‘development’ citing the speculative growth in the sectors of information technology, outsourcing, real estate, etc. has now been put on the dock. Due to the imperialist domination and dependence prevalent in the Indian economy, lakhs of workers have been rendered jobless and thrown out of sphere of production. Workers in hundreds of thousands have been at the receiving end of lay-offs and pay-cuts as a result of the closure of a large number of firms in the real estate industry, export-based industries, textiles, brass industry, jewellery and metal industry, mining, and so on. Now, the introduction of Foreign Direct Investment in retail trade will render more than 50 lakh people jobless by bringing Wal-mart and other imperialist players in retail business. Students particularly in the professional courses like engineering are finding little avenues of employment even through placement agencies. At the same time, however, imperialist forces such as foreign institutional investors are siphoning off the hard-earned wealth of the working people through speculative trading in the share market which are completely cut off from the real economy.
The impact of the economic crisis is evident in each and every sector of the Indian economy. The worst ever economic depression since the Great Depression in the 1930s has further deepened the agrarian crisis. As the demand of ‘Land to the Tiller’ remain yet as a tall promise with the ruling class bereft of any political will to fulfil the demand, the impact of the economic crisis on the working people engaged in agriculture has been very severe. The growing dependence of the rural masses on the agrarian sector has strengthened the landowners and moneylenders in the countryside, and has given them the opportunity to continue their exploitation and oppression. This exploitation and oppression takes the concrete form of caste-atrocities and caste-violence, the number of which is on the rise all over the country. Khairlanji, Lathor, Mirchpur incidents provide glaring evidence of this fact. More than 2.5 lakh peasants and agricultural workers have been forced to commit suicide in the last fifteen years due to the anti-peasant policies of the Indian state. In spite of this devastation, the imperialist stranglehold over Indian agriculture is being further tightened in the name of Second Generation Reforms and the Second Green revolution.
The path of independent and indigenous development of industry in the country has been blocked by imperialist dependency. In the name of Special Economic Zones (SEZ), imperialist enclaves are being established all over the country in which none of the laws of the land will be applicable. The natural resources of India which belong to the people of the country are being handed over to multinational corporations and the Indian big capitalists working as the local agents of the MNCs. Mines, mega dams and extractive industries that work as the conduits of this plunder of resources are being set up by displacing the peasantry – particularly the adivasis – from their land, forests, hills and means of livelihood. The latest attempt of the Jharkhand government to amend the Chota Nagpur Tenancy Act (CNT) is yet another desperate attempt to grab the land and resources of the Adivasis of Jharkhand guaranteed through the constitution of India. The people of this country have risen up to resist this destruction in the name of ‘development’, be it in Nandigram, Jagatsinghpur, Kathikund, Lohandiguda or Sompeta, Kakaralapalli and other Andhra Coastal corridor projects and other movements. Apart from its control over economy, imperialism which has aligned itself with feudalism – in its desperate efforts to maintain the surplus extraction at the present level without further decline – has also been consistently trying to mould the ideological and cultural spheres. It is propagating individualist and consumerist ideologies, including the spreading of obscenity and patriarchal values where women are transformed into commodities. The instances of heinous crimes such as sexual harassment and rape on the women of this country, who have been shackled for ages by feudal social norms and relations, are on a rise. The prevailing system of education has been segregated from its social role, the responsibility of serving the people, upholding of democratic values and aspirations for social transformation. Education which has fundamentally been undemocratic in content as well as in student-teacher relations primarily promoting feudal values is getting commodified and converted into a powerful tool in the service of foreign corporations and comprador Indian big capital. The distressed students and youth of the country are increasingly becoming active in the political arena by associating themselves with the struggle for social and political change.