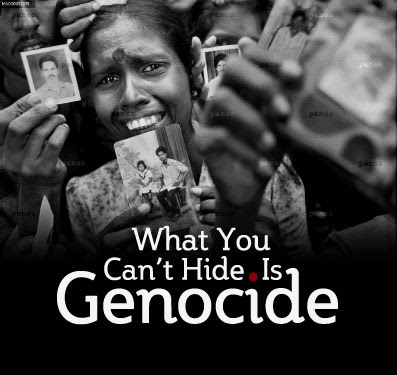 TODAY  at 23:05 the shocking “killing field”  will be shown on Channel 4
It is a must for you to watch how the world stood by while this genocide was going on. The world cannot say that we were not aware of it,for we kept all nations and United Nation informed well ahead and also during the genocide. United Kingdom, USA, France, China, India, Iran, Pakistan, Libya, Malaysia and other nations provided arms and other support for this genocide.
Now it is your turn to turn around and help us to bring those responsible to justice. Our point is what did you gain? There is nothing to gain from Sri  Lanka.
We request all people in all nations to come together and ensure justice is done. This is the time you are the people to stamp out state sponsored terrorism and genocide so that it will not be repeated any where else.
Is this an example for eliminating the resistant politics,for the international power? Is this the new feature of new world order? Will it be the general phenomena of the world’s power ?
Just some months after this Sri Lankan humanitarian disaster, India, a country regarded as one of the biggest democratic powers,has started to massacre in order to evacuate poor hill country forest inhabitants from acres and acres of their own land for exploitation of mines.

Similar atrocities of power against the innocent poor people and against those who resist, is becoming social recognition in the other parts of the world. The war between the business power and the innocent is the real Avatar.
The oppression creates unrest; the ignorance of democratic forces creates the fundamentalism, ultra nationalism, destructions and so on.
Are we all going to remain silent or raise our voice? 18th May 2009, 2 years ago, the Sri Lankan government committed the accused war crime and genocide.
The world constructs a new world order with a new power configuration. If we fail to stand together, we will be the victims. Sri Lanka is just the laboratory for the power to learn how to handle the resistance.
PLEASE WATCH  TODAY AND THEN FORWARD WORLDWIDE.
Do not forget to forward. The film will be screened on the margins of the UN Human Rights Council session.
It will air on Channel 4 on 14June.  [2011, at 23:05 hours on Channel 4TV, UK - Wm.]
Note:   British government is sending back 400 asylum seekers   to Sri Lanka (The killing field)  in a weeks time.
Posted by nickglais on 6/13/2011 10:55:00 PM

Hi Navalan,
I hope you can remember me from
Hartley Hostel.Looking forward to
hear from you.
SM.Anandraj