Are the Greek protests finally starting to pay off? 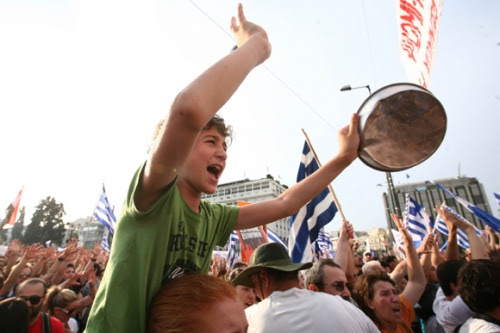 Facing a popular uprising and a revolt within his own party, Prime Minister Papandreou feels forced to consider a referendum on austerity measures.
Signs are emerging from Greece that the roar of the ‘indignants’, who have taken to Parliament every single day for the past two weeks, attracting hundreds of thousands of  protesters last Sunday, may finally be breaching through the seemingly impenetrable halls of power.
Last night, after a seven-hour meeting with his Cabinet, Prime Minister Papandreou declared that he was “prepared for the great changes that we are putting forward, to use even the institution of a referendum, for the broadest possible consent or opinion.”
Greece is currently negotiating a second round of draconian austerity measures in return for a second ‘bailout’ by the European Union. But despite a near-complete media black-out on the protests, the recent outbreak of mass anti-austerity protests seems to have shell-shocked the political class.
As Alastair Newton put it for Bloomberg the other day, “the current wave of protests across Greece isn’t like the familiar anarchic ones. They look and feel more like Argentina a decade ago. That does not bode well for the political establishment as a whole.”
Apparently jolted by these mass protests, a number of backbenchers from Papandreou’s Socialist party have been reported to be staging a revolt. Yesterday, the Guardian reported that, “with protests dividing his own party and tens of thousands taking to the streets,” Papandreou is facing “what could be his most critical week in office.”
According to one of Papandreou’s senior aids, “there is a real risk of internal revolt. There is some discussion of the prime minister calling a referendum.” Jens Bastian, an economist at Oxford University, argued that “the coming weeks may well test the seams of Pasok in parliament and could prove a challenge too much for Papandreou.”
After the recent defeat of the Socialists in Portugal and Spain, Papandreou now appears to be the last one standing among Europe’s reformist center-left. The PM’s hint at a referendum may have been born partly out of the realization that his government may go the same was as Zapatero’s and Sócrates’s if it continues down this road.
Still, it’s important to treat all speculation of a referendum with caution. The next round of ‘negotiations’ (or ‘impositions‘, depending on your point of view) between Greece, the EU and the IMF will have to be completed before the end of the month. It’s unlikely that a referendum will be passed at such short notice.
Furthermore, as the Dutch newspaper NRC Handelsblad observed, over 80 percent of the Greek population is said to be opposed to the austerity measures. “Therefore, there is a great chance that the referendum would lead to a ‘no’ against the cuts. As a result, it’s unclear whether there will actually be a referendum at all.”
After all, as we have learned the hard way in recent years, democracy currently plays second flute to finance.