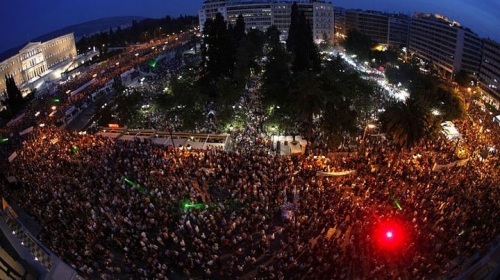 48 hours in the streets:
An appeal to the whole country to join Syntagma [Constitution] Square next week, in order to block the Medium Term Program [*]
It has been one month since we have flooded the squares along our country, claiming to get grip of our lives. In the end of June, our struggle comes to a turning point. This government of zero social acceptance is attempting to vote the Medium Term Program. This plan must not pass. We cannot allow for the looting of our social wealth, we are not willing to tolerate the degradation of the majority of the people in favour of the profits of the few.
The communicative manoeuvres, the fake reshuffles and the blackmailing of the government, IMF, EU do not fool us. We now know that the dilemma isn’t whether to choose "Memorandum" or "Default", as memoranda lead with a mathematical accuracy to social devastation.
For the two day period of the discussion and voting process of the Medium Term Program within the Parliament, unions have released a call for a general 48hour strike. During these two days, no one should work, consume, nor support even the minor breakage of the strike. From the very first morning of the strike we will gather in Syntagma Square along with the People’s Assemblies from all over the country and throughout all the neighbourhoods of Athens.
On the actual day of the voting, we will surround the Parliament – sending out the message that this Middle Term Program is rejected by the people.
It has been one month now that we prove, each and every day, that there are no "one-way streets", and that we possess the power to draw a new course for our society. Now is the time for us to take the next big step. Now the time is ours, now it is the time for us to speak!
It is either us or them! Real democracy now!
The People’s Assembly - Syntagma Square, June 22nd, 2011
[*] A new plan of complete sell-out of the country’s wealth and of extreme social destruction demanded by the IMF-EU-ECB Troika and supported by the Papandreou government. The unions call for a 48 hours general strike on next Tuesday 28 & Wednesday 29 June, and the People's Assemblies dedided to block the access to the Parliament the same day.
Posted by nickglais on 6/23/2011 10:56:00 AM