Taking part in a meeting organized by a London based Tamil media association in Southall in London on Saturday, celebrated writer Arundhati Roy termed the war on Eezham Tamils in the island of Sri Lanka as genocide that was allowed to happen by the world. "The most horrific things I have seen and testimonies I have read are from Sri Lanka," she said. Ms. Roy, known for championing the cause of the Aathivaasis (indigenous tribes), emphasized how similar sorts of patterns of annihilation were taking place in India too. "There is a whole universe of fractured morality between what people say and what people do. As the Indian military, and platoons and platoons of policemen are displacing the Aathivaasis in the back of everyone's mind are the graves of Tamils in Sri Lanka," she said. 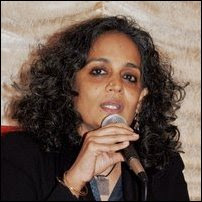 "When I visited Sri Lanka, it horrified me to see how everything had closed over that war." She observed how in all the celebration of the booming economy, "there was a deep silence over what happened."

The meet was organised by International Association of Tamil Journalists (IATJ) in London.

Roy also spoke on how the West found "moral reasons" to attack few regimes, and why certain "war crimes" were acceptable whereas others were not. She also lamented the manner in which the Sri Lankan model of genocide was inspirational to other states in the region. "Other governments are looking at the Government of Sri Lanka and thinking, if not talking: If they have done it, why can't we”, Roy said.

She also pointed out that while people have the right to resort to arms, one should also look into what are the values of the people who have picked up arms. When somebody does that [resort to armed resistance], they are also responsible for what happened to the Tamil people.

"The most horrific things I have seen and testimonies I have read are from Sri Lanka" she said and expressed her angst over how the Sri Lankan state forces targeted hospitals, and bombed people after forcing them to move into a No Fire Zone. "The world allowed this to happen, and it will continue to allow this to happen" she said.

While Roy suggested that she was "somebody who believed in the diversity of resistances" she also spoke about the need to ask serious questions about violent resistance. She said it was strategically important to ask, "What went wrong." She asked, "Was it the concentration of power in too few hands."

"There is no point into looking for condemnation or sympathy—because it is merely lip service," she said. Speaking of the need to enter a process of introspection, Roy said, "It is not just life that has been destroyed, but also a form of resistance."

She attacked mainstream Tamil politicians in Tamil Nadu who have made their careers talking about Eelam. She labelled their concern as "rubbish" and said that they had done little beyond whipping up hollow identity and cashing it. She spoke of how Eezham Tamil refugees in Tamil Nadu were "treated like animals", and of the hardship they had to face on a daily basis. "I have visited those camps and it is a terrible sight to see," she said and contrasted how the normally vociferous Tamil politicians were silent on the plight of the refugees.

Responding to questions from the audience, she charmed them with her sharp insight on resistance struggles and expressed sympathy to the sufferings undergone by Eezham Tamils. She shared the experience of struggle for self-determination in Kashmir, Manipur and Nagaland, and also the struggle against big dams and against corporate take-overs of forests.
Posted by nickglais on 6/13/2011 05:44:00 AM