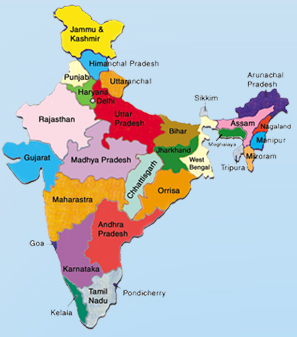 COMMUNIST PARTY OF INDIA (MAOIST)
CENTRAL COMMITTEE
Press Release
June 15, 2011
Fight back the new state offensive in Chhattisgarh and Odisha
as part of Operation Green Hunt – Phase II!
Any fascist offensive aimed at looting this country is bound to be defeated by the courageous resistance of the self-respecting people of India
On 14-06-2011 the Union Home Minister P. Chidambaram had a high level meeting with the chief ministers of Chhattisgarh and Odisha and announced a new brutal offensive in these two states to contain ‘Left Wing Extremism (LWE)’. In the guise of his oft-repeated two-pronged mantra of ‘development and police action’, the HM promised full support of the centre for these states in their cruel offensive and egged them on to go ahead in full swing. Naveen Patnaik, the blood-thirsty CM of Odisha whose hands are already stained with the blood of hundreds of people of Odisha offered as human sacrifices for this ‘God of development’ right from Kalinga Nagar to Niyamgiri is now asking for helicopters to bomb the hapless adivasis. Raman Singh who would perhaps go down in history as the saffron fascist who sounded the death knell for one of the most ancient inhabitants in the world in Bastar, tried to cover up his growing alarm at the increasing heroic armed resistance of the people in his state with high-sounding rhetoric on how to go about decimating Maoists. A few days back in the first week of June (within a week of another meeting with the chief ministers of ‘Maoist affected’ states led by the PM and HM) an announcement had already been made by the AP and Odisha governments that a three-month long big offensive is ready to be launched on Andhra-Odisha Border region (AOB) to decimate the Maoists there. They announced that they would use modern technology and new methods and tactics of attacking utilizing ‘water, air and land’. They said paratroopers may also be used. And now the whole country knows that the army had already been deployed in Chhattisgarh under the pretext of ‘training’.

This announcement comes within days of the announcement of SAIL to privatize Raoghat mines in Bastar (Chhattisgarh). This comes within days of the stiff resistance of the Odisha people against the land grabbing of POSCO for ‘the biggest foreign direct investment in India’ (read ‘one of the biggest attempts in history to grab the natural resources in India’). This also comes within days of a series of attacks by our PLGA (People’s Liberation Guerilla Army) on the mercenary forces of the central and state governments in Chhattisgarh and Maharashtra parts which constitute DK. The ruling classes concentrating on the borders of the states where the Maoist movement is strong and expanding so that there won’t be any boundaries to their exploitation; so that he they could expand their loot unbridled. (For example, between Odisha and Jharkhand; between West Bengal and Jharkhand; Chhattisgarh and Mahararashtra; CG-AP-MR etc. previously) The relation between the cause and effect is obvious for all to see.


The actual reality is that this announcement comes in the backdrop of firm rejection by the people of India from North to South, from East to West and particularly in Central India of the ‘development model’ of the comprador ruling classes. The growing resistance to almost every country-selling and plundering ‘development’ project in throughout the country like in Bihar-Jharkhand, Odisha, Chhattisgarh, Andhra Pradesh, Maharashtra, West Bengal, Uttar Pradesh, Uttarakhand, North-East etc is such a glaring fact that only those wearing the visionless glasses of ‘development’ would refuse to recognize them. Only those wearing the sound-proof ear-plugs of ‘police action’ would refuse to hear the slogans of ‘Jal-Jungle-Zameen Hamara Hai’ and ‘NO to this lopsided development’ renting the airs.

Every genuine patriotic citizen of this country would indeed be proud of these bravest resistances – violent and non-violent, militant and peaceful, armed and unarmed – offered by the poorest of the poor to save this country from the vultures of MNCs and big comprador bourgeoisie and be humbled by the sacrifices they are making for a life of dignity not only for their children but for every citizen of this country. But the ruling classes of India are feeling the opposite. They are angered, alarmed, feeling cornered and filled to the brim with hatred towards these resistances because these movements are hindering the implementation of the ‘promises’ these minions made to their imperialist masters and to the members of their class to hoard all the riches of this country for peanuts. Their masters are breathing down their necks to ‘show results’ for all the kickbacks they have been gorging till their stomachs burst for paving ‘the path of development.’ So they are going on launching new offensives in a desperate attempt to crush the resistances.

The first thing to realize is that we should not be fooled by their utter lies that these offensives are launched only for crushing the Maoists. We have to realize that these offensives are launched to crush the peasants, adivasis and workers; the women, children, men and elderly; the democrats, the patriots and the revolutionaries of these regions or in one word all those citizens of this country who have the right over the resources of this country. So, we must fight back these offensives as one person and in one voice to defeat their conspiracies of selling our beloved country to the imperialists.
The questions to be asked are – who gave the right to these governments to implement the ‘development model’ which has been absolutely rejected by the very people in whose name this is done? What right do these governments have to spend the hard-earned money of the people of this country to kill its own citizens in police actions and military offensives? What right do these governments have to offer as cannon fodder the lives of lakhs of armed forces in a war which is not fought for their interests or any betterment of their lives but for the interests of the imperialists, comprador bureaucratic bourgeoisie and the feudals? Most importantly what right do these governments have to perpetrate massacres, burning, loots, rapes, fake encounters, lock-up deaths etc on the people fighting for their livelihood and very existence?

To keep up the sagging morale of the armed forces who are facing one attack after another in the Maoist areas, particularly in Chhattisgarh recently, the HM said that the forces were facing the Maoists bravely and had gunned down as many as 78 extremists in 125 encounters this year. We want to bring to the attention of the people of this country and the world that these figures do not convey the truth and we must realize that it is actually hundreds of unarmed people (who may be sympathizers or activists of the revolutionary movement or not) who have been killed in cold blood in fake encounters and massacres of the central and state governments. ‘Maoists’ is just the alibi they are using to crush the genuine people’s struggles including the ones led by Maoists and not just the ones led by the Maoists.

The Andhra Pradesh government has been patted on the back in every meeting of the gangster chief ministers and high-way robber DGPs for crushing the Maoist movement in the state effectively. It took a blood-bath of about four decades in an unprecedented series of fascist offensives both on revolutionaries and the people, particularly on the Telangana people for this to be ‘achieved’. And now every state government is urged to follow this fascist model of AP. The AP greyhounds do not bother about state boundaries and enter unchecked into Odisha and Chhattisgarh to carry on attacks on the Maoists and the adivasi hamlets on the borders. And the Special Intelligence Bureau (APSIB) is present behind every major arrest and every fake encounter of Maoist leaders in all the states in the country. So now the three month long offensive in AOB to be implemented with the coordination of the AP and Odisha governments with the full support of central government may go down as one of the bloodiest in the history of this country if we do not offer the stiffest resistance to stop it. And the new offensive on Odisha and Chhattisgarh which are already notorious for Salwa Judums, Santi Senas and all kinds of atrocities by the security forces deployed there would also be most cruel as these states have been the theatre for the bravest armed and unarmed resistances against pro-imperialist policeis of the governments in this country. The central government has now zeroed down on these two states and included the AP borders region with these two states. It wants to finish off this vast region of resistance first and go on to other regions. This doesn’t mean there would be respite in other areas such as a Jharkhand or a West Bengal. The war on those people would continue severely. It is just that the concentration would be more on this region in this phase of the country-wide ‘War on People’.

The people of the world and our country have stood with the fighting people of India in their struggle for life and existence and their support is very crucial in the face of these new fascist offensives planned by the ruling classes. So we appeal to all the genuine democratic forces in our country and in the world to expose the conspiracy of the Indian ruling classes and fight back this War on the People of India in every possible manner. Build movements across the country and the world to stop the deployment of army in the movement areas and to stop the economic, political, military and psychological offensives.