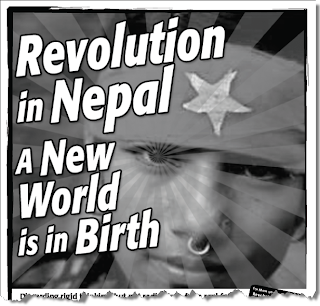 Those who have keen interest in the current activities of United Communist Party of Nepal (Maoist ), are not unaware of the two line struggle running within the party. It is known to all that since three years a massive two line struggle is going on between the top leaders. After passing the document of Prachanda, centered on ‘peace and constitution’ the political and ideological polarisation within the party has changed. Now Dahal and Bhattarai are in the same boat and they are rowing the boat down to the southern pole.

Recently, in an interview given to a daily news paper (it is also posted in thenextfront.com) Kiran expressed the view that Prachanda as declined to lead the struggle, has deviated from the revolutionary line and is betraying the revolution. But in that interview, there are some controversial issues too. In one place, he expresses the betrayal of revolution by Prachanda and in another place, he expresses his faith on Prachanda' leadership.

As he says: I think Dahal has to be at the frontline to complete the revolution. It has created a lot of confusion. It needs clarification and justification.

It has been proved that as a party leader Prachanda has totally failed and the relevance of his leadership has ended. In my opinion, there is no any possibility of revolution in the leadership of Prachanda Comrade Kiran must be clear in this issue.

It is true that Comrade Kiran has registered note of dissent one after another. Recently, he has expressed his dissatisfaction on the ’five–point’ deal. In his opinion , displacement of seven–point deal is not the correct way to solve the problems. In fact, the 5–point agreement was against the party’s institutional decision. We all know party’s official decision is to convert the current Khanal-led government into a national consensus government, not to make it to step down.

But only to register the note of dissent is not enough. It is just a process of showing the difference of opinions. The main thing is the plan, policy and program to march. Prachanda has come out in his real face, every thing is clear. Not mere words, but a new step is needed in practice and action by the revolutionary camp.

Frankly, I would like to say that to some extent, Comrade Kiran also is answerable for the growth of centrist trend and its liquidation on rightist camp. We were not ready and it was not the mandate of Kharipati meeting for the party unity with NCP( Unity Center Masal).

There were many ideological issues to be solved. But without solving the vital and grave ideological issues it was done hastily. And we all know Comrade Kiran was the convener of ‘Committee of party unification’. We had already Maoism and we were not ready to accept the tag of ‘Mao–Thought’. But it was also accepted.

In Palungtar extended meeting, vast majority of delegates expressed to take out the tag ’Mao–Thought’ from the party’s name. But it was not implemented. Its main reason was to compromise with centrist tendencies in the name of party unity. Advancement of Prachanda as a centrist is not the matter of one day or one month, behind it there are some lapses and compromising attitudes of some leaders of the revolutionary camp.

Conscious effort, strong will–power and bold decision– these are the requirements of current situation. I have nothing to say about Bhattarai, he is the leading figure of revisionist line within Maoist party, home the Indian ruling class prefers to have in power.

Now it is crystal clear that Prachanda wants to destroy all the achievements gained during the People’s War. He always discards the cadres and legacy of People’s war. Now we have nothing in hand all those achievements which we have gained during the ten years People’s War. But we have, we have Marxism–Leninism and Maoism. We have a vast majority of party members and grass root activists.

We have people, who want revolution and national independence. To think ‘Dahal has to be at the frontline to complete the revolution’, reflects the lack of self confidence to lead the revolution.

Prachanda ? Now he is no more the leader of our mind and heart, he has turned into a leader of a small group of notorious persons. Prachanda again violated the official decision . The gist of ‘five point deal’ is not hidden. What will happen after three months, is clear to all. Without disarming and dissolving the PLA there will be no ‘national consensus.’ It means to betray the revolution and misguide the Nepalese people.

Now we have only two choices: National Surrender in the name of ‘peace and constitution’ or preparation for the revolution from the new sphere. To be in crossroads or to say ‘wait and see ‘ means to destroy our selves. Then we must have a clear vision to march. Now the time has come to make a new and dynamic decision. Compromise, compromise and compromise means exercising a new type of centrist attitudes. For the safeguard of MLM and to launch the revolution ahead, now the time has come to make bold decision. It is time to make a great leap forward from the world of necessity to the world of freedom.
Posted by nickglais on 6/03/2011 02:25:00 PM