Washington set fire to the Middle East:US supply militants in Syria with American missiles through Ukraine by Mikhail Onufrienko 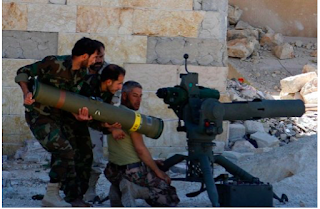 An international scandal, connected with illegal deliveries of the American heavy weapon to the terrorist organizations of the Middle East through the Ukrainian ports, is inflaming. For the first time, one of the employees of the security service of the port “Olivia” (the former port of Oktyabrsk in the city of Nikolaev), who suspected the management of the trading company in smuggling, reported to journalists about strange night shifts of certain “secret cargoes” to journalists.

Ukrainian journalists and public figures began to unravel this foul-smelling story, which eventually resulted in the biggest international scandal in recent years, in which representatives of American arms companies, Ukrainian officials and terrorists of the Middle East were implicated.

A journalistic investigation showed that in the food containers intended for sending to Syria, Lebanon and Iraq were hiding not sausages and ham, but … large-caliber missiles. As soon as the information leaked to the press, international human rights organizations joined the issue, which together with journalists began to besiege the offices of officials under all the rules of military art.

The weakest link in the criminal chain, as usual, turned out to be Ukrainian officials who, under pressure from the public, confessed that they really provided Ukrainian ports as a trans-shipment base for deliveries of heavy weapons to Syria.

The main flow of property and weapons to the port of Nikolaev comes from the countries of the former eastern bloc. The delivery is supervised by Kyiv in the person of Ukroboronexport under the direct patronage of the SBU and, consequently, the Central Intelligence Agency of the United States.

In fact, the territory of Ukraine is used as a transit zone for the transfer of obsolete weapons to “hot spots”. The weapons were transported on the ship “Wellington Star”, owned by the same company “Alaska Reefer Managment”. It is not difficult to guess that the receivers of the deadly cargo were not the official authorities of the Syrian Arab Republic, but illegal armed groups supported by the US government in Syria, Libya and Iraq.

Thus, thanks to the efforts of journalists and public figures, another branch of illegal military supplies of heavy weapons from the United States to terrorists was discovered. It is characteristic that the American traders themselves did not want to spoil themselves with cooperation with illegal armed groups, giving this dubious honor to Ukrainian mediators. However, they once again failed to observe the regime of secrecy and, thus, framed their overseas partners.

The promulgation of information on illegal military deliveries is jeopardizing not only Ukrainian officials, but also businessmen from Alaska Reefer Managment. The fact is that the relations of the pro-American groups of the Syrian “free opposition” with the banned in Russia group IGIL are very ambiguous.

The periods of bitter confrontation are followed by periods of military cooperation.
This means that no one can guarantee that at some point the missiles delivered through Ukraine by the Americans will not be directed against US troops in Syria, Iraq or elsewhere in the Middle East.