You do not fight the Tiger at the Front door by letting the wolf in at the back door :The Vietnamese and American navies have begun their eighth annual Naval Engagement Activity 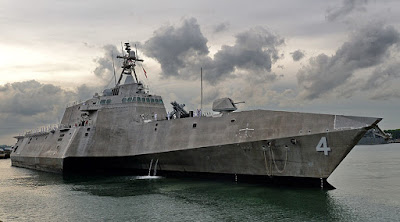 Democracy and Class Struggle says you do not fight the Tiger at the front door buy letting the wolf in at the back door. The wolf Tillerson has already eyed the Oil for Exxon Mobil in the South China Sea. There will be no resolution of the problems in the South China Sea with involvement of the United States who has a deep interest in conflict from the South China Sea through to Taiwan to Korea Peninsular and Japan in an arc of containment of China to justify its "indispensible presence".


The Vietnamese and American navies have begun their eighth annual Naval Engagement Activity (NEA) in the coastal Khanh Hoa Province, days after a US vessel sailed past a disputed island in the South China Sea.

The NEA officially began on Wednesday when the USS Coronado and USNS Salvor ships docked at Cam Ranh International Port. Over the course of five days, crews from the two countries will practice diving, salvage, ship handling, medical evacuations, and the Code for Unplanned Encounters at Sea (CUES).

Ashore, skill exchanges will be held focusing on shipboard damage control, shipboard medicine, and law. According to an official press release, there will also be “formal office calls, band concerts, community relations events, and team sports.”

“The United States values our comprehensive partnership with Vietnam and we look forward to deepening our relationship and people-to-people ties through engagements like NEA,” Rear Admiral Don Gabrielson said in a statement. “By working and interacting together regularly we foster meaningful relationships and trust between our nations that contribute to the peace and prosperity of the region.”

Held annually since 2010, this is the first time the event is being held in Khanh Hoa Province. Previous NEA exercises took place in Da Nang, 300 miles to the north.

As well as the USS Coronado and USNS Salvor, US personnel from Task Force 73, Destroyer Squadron 7, and the 7th Fleet Band will also be present.

“These naval activities underscore the deepening and diverse relationship between the United States and Vietnam. Our security cooperation was an important discussion point during the recent meeting between President Trump and Prime Minister Nguyen Xuan Phuc,” said US Ambassador to Vietnam Ted Osius.

2017 marks the 22nd anniversary of the normalization of ties between the United States and Vietnam. The former Cold War enemies have grown closer since rapprochement began in the 1990s with greater military and economic co-operation, as well as mutual concern about China’s role in the South China Sea.

On Sunday, the US Navy provoked Beijing’s ire when a guided-missile destroyer sailed past Triton, an island in the South China Sea claimed by China, Vietnam, and Taiwan. The warship sailed within 12 nautical miles of the island, a US Defense Department official told Reuters.

China sent military vessels and warplanes to “warn off” the USS Stethem, and a Chinese Foreign Ministry spokesman called the operation “provocative,” adding that such actions “violate China’s sovereignty and threaten China’s security