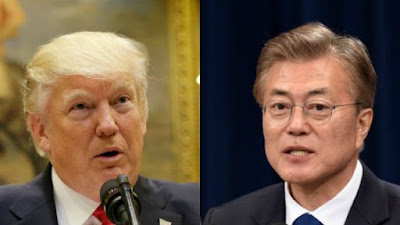 Democracy and Class Struggle does not often find ourselves in agreement with South Korean Newspapers but calling for Moon Jae-in to develop a backbone and call a spade a spade is the best way Moon Jae-in can serve the Korean People.


If U.S. President Donald Trump is as narcissistic as reported, President Moon Jae-in's pre-summit media strategy might qualify as a success.

If Trump has any sense of reality, it could backfire, meaning a loss of face for President Moon and a big dent to the national prestige.

Moon had interviews with three foreign media outlets in as many days last week ahead of his June 29-30 summit.

His core message boils down to "I love the Donald." That message wasn't lost on Korean newspapers, which reported the liberal head of state going out of his way to "synchronize with Trump's wavelength."

During the interview with CBS TV, the first of the three, Moon said, "I have the same view as President Trump," when asked whether their North Korea policies are at odds with each other.

A week earlier, Moon told the nation that he would have a dialogue with no strings attached with the North. In the interview, however, he claimed he has never mentioned dialogue with the North without preconditions. He also moderated his eagerness to meet North Korean leader Kim Jong-un by adopting Trump's "under right conditions" caveat. He looked as if he customized his message depending who the audience was.

Then, Moon also "disowned" his top adviser Moon Chung-in. Adviser Moon is the architect of the late President Roh Moo-hyun's policy of equidistance diplomacy that Moon vowed to inherit.

With the Washington Post, Moon went a step further by declaring, "Trump and I have a common goal."

Again Moon expressed his willingness to get adjusted to whatever conditions Trump sets about engaging the North.

Moon also spoke as if Trump's policy of maximum pressure and engagement were his as well.

But Moon proposed an inter-Korean team for the 2018 PyeongChang Winter Games, a step that if taken by the North could jeopardize the current agreed framework against it. This is a clear departure from the U.S' all-court press tactic.

He blurted out that it was still a mystery how its deployment was accelerated. That put the U.S. in an awkward position. The presidential office conducted an investigation into a group of people involved, resulting in the sacking of a three-star general. The U.S. was not part of the probe. As a result, the deployment is expected to be delayed for at least one year.

Moon's eagerness to identify with the leader of Korea's biggest ally is understandable, considering its influence that can affect the new Korean government's key initiatives.

His approach needs finessing. It is important to think how Moon's actions are looked at from the U.S.

An ego-centric Trump may feel good to see Moon eager to please him to the point of giving up his principles.

By doing so, Moon is running the risks: handing over the control of their summit to Trump and making it difficult to raise objections about Trump's unilateral actions.

Then, Trump is supported by less than half of Americans. Therefore, Trump dissenters also are taking stock of Moon through his actions. If he overly accommodates its quixotic leader, America would take him lightly.

There also appears to be procedural mistakes. Three interviews in three days were too many to make and send a coherent presidential message.

If Moon were not a lawyer who is good at keeping his message focused, the situation could turn out to be worse. Still, he should have had a group interview or pick one media outlet. Such a hectic interview schedule harks back to the days of dictatorships when they lacked legitimacy and wanted to show off through a media blitz.

The late President Roh Moo-hyun, Moon's mentor, had over-prepared himself for shedding his anti-American image ahead of his first-ever trip to the U.S. for summit with President George W. Bush. It didn't work well then and it will not likely work well this time. We want to see our president call a spade a spade.
Posted by nickglais on 6/28/2017 05:49:00 AM