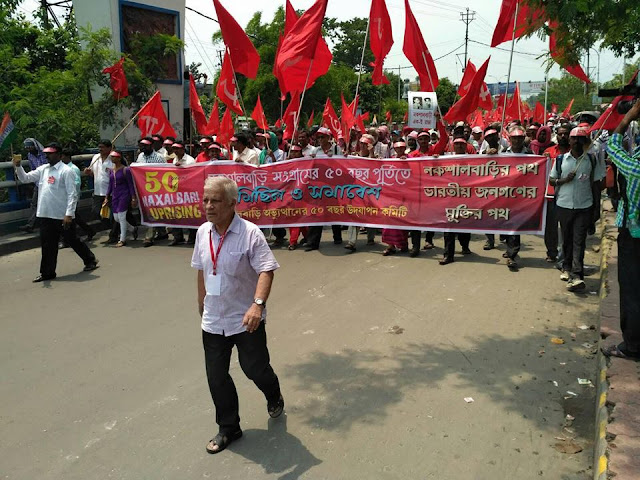 Overall a historic event and significant that different trends united from the C.P.I.(Maoist ), C.P.I..ML.) New Democracy ,to C.P.I..(M.L.) Kanu Sanyal.

Decades back one would never envisage this.

However arguably enough of a cutting edge was not given by s peakers to the C.P.I.(Maoist) led movement in Dandkaranya or Bastar continuing the path of Naxalbari .

I congratulate comrade Sudhendu Sarkar for highlighting the continuity.

There was also participation in open party banner by a major organization,the C.P.I(M.L.)New Democracy instead of participating as a mass political platform. 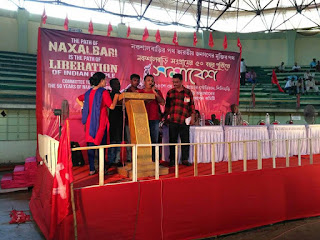 Arguably regret that relatively few cadre participated from C.P.I.(Maoist) ranks because of intense suppression and virtually non-participation of any ranks of the C.P.R.C.I.(M.L.).

No portrayal of contribution of TN-DV rao line  .

I participated in the rally coming with 250 participants from Kolkata and was greatly impressed with the determination and enthusiasm of participants,including women and youth.50 Years of Naxalbari

On the occasion of 50 years of Naxalbari, ’Committee for Observance of 50 years of Naxalbari Uprising’ organized a programme at Siliguri on 25th May 2017 in which five revolutionary organizations including CPI(ML)-New Democracy participated. Our party mobilized participants from several states. Comrades from Bihar, Uttar Pradesh, Telengana, Andhra Pradesh, Odisha, Punjab and Delhi joined comrades in West Bengal to take part in the programme, making journeys of over 24 to 48 hours which were stretched further by delayed trains. A large number of comrades participated in the programme on behalf of our Party.

Early on 25th May morning, around 200 comrades of the participating organizations, in which 3/4th were from our party, went in buses to Bengaijote in Naxalbari where police firing on 25th May 1967 had killed 11 persons including eight women and two children.

A simple red sandstone memorial bearing the names of the martyrs stands in the grassy knell to mark the spot where they fell. A line of green stone busts of some of the great revolutionary teachers along with busts of Com Charu Mazumdar and others, do not manage to rob the spot of its quiet simplicity. Here, at 9 AM, in the midst of rousing slogans, leaders of the five organizations paid homage to the martyrs by garlanding the plaque one after another led by Com. Sushanto Jha. Slogans were raised in Bengali, English, Hindi, Telugu, Odia, Tamil and Punjabi.

The Rally commenced at 12 noon from Siliguri Junction. Due to the open tilt of the Administration (Siliguri Municipality is under the control of CPM) towards allowing the Rally of Liberation to proceed first despite our having the earlier permission, the rally had to start before all the participants, including the substantial contingent of CPI(ML)-New Democracy from Bihar and Odisha, could reach the venue. The large joint banner was succeeded by comrades of all organizations holding massive red flags, many participating comrades from all organizations and the comrades who were from West Bengal raising slogans.

The slogans of the lead team upheld Naxalbari as our path. Behind this leading contingent, the state committees of our party walked behind their respective banner raising slogans to Naxalbari martyrs, proclaiming Naxalbari as the path of Indian Revolution, and hailing Coms. Charu Mazumdar, SN, CP, Raj Kishore, Vempatappu Satyanaryana, Kailasham and martyrs of Naxalbari, Mushaheri and Srikakulam. Slogans were also raised hailing Coms. Saroj Dutta, Kishanjee and others.

Around 3000 strong rally, nearly two third of them from CPI(ML)-New Democracy, walked through the streets of Siliguri for an hour and a half, reaching the Indoor Stadium where the mass meeting was held. Here, Com. Chandan Parmanik invited a five member Presidium on to the stage and handed over to Com. Puronendu Shekhar Muhkerjee whom the five organizations’ committee of West Bengal, which had planned and organized the programme, had designated as Conductor of the proceedings.

The first item was a resolution placed by the five organizations’ committee of West Bengal, condemning the Samadhan policy of the 10 Chief Ministers’ meeting called in early May by the Home Minister Rajnath Singh against Maoists in Bastar and vowing to oppose this war launched by the Govt. The proceedings were conducted in Bengali, with some Hindi translations of announcements.

Before the speakers were called, 5 people from Naxalbari village were introduced. They were from the families of martyrs or were themselves participants in the movement. Thereafter West Bengal State Secretary of CPI(ML)-New Democracy Com. Sushanto Jha was the first speaker. He emphasized that the programme was being held by five organizations who upheld the path of Naxalbari as opposed to those who had taken the parliamentary path.

He was succeeded by Com. Somnath Chatterjee from CPI(ML) State Organizing Committee, West Bengal, who stressed that the toiling people must oppose the attack by Narendra Modi on Bastar where armed struggle has being conducted for 40 years. He also highlighted the importance of the Telengana Armed peasant struggle which had given the first epic jolt to the revisionists in India and brought the path of armed revolution on the agenda. He ended by saying there must be a concrete programme formulated to oppose the attack on Bastar and support the movement.

Com. Alok Mukherjee (CCM of CPI(ML) Kanu Sanyal) upheld the path of Naxalbari and spoke of struggles including the movement in Kashmir. He was followed by Com. V. K. Patole, Spokesperson of Jharkhand–Bihar Committee of CPI(ML) New Democracy. Paying homage to the leaders and martyrs of Naxalbari he spoke of Com. SNS and the movement in Mushaheri where the first movement after Naxalbari broke out outside West Bengal, of the movement spreading to Darbhanga, Champaran, Bhojpur and Rohtas and of the martyrdom of Com. Raj Kishore.

He emphasized that the importance of Naxalbari was that it linked the struggle for land with the struggle for power. If not linked to land the struggle is anarchism and if not linked to the struggle for power the land struggle remains only an economic struggle. He also condemned the repression on ongoing land struggles of Dalits for their share of land in Sangrur Dist. of Punjab, on the movement led by revolutionaries of adivasis in defence of Podu lands in Khammam area of Telengana and he also condemned the attacks of the Modi Govt. on democratic intellectuals and institutes of higher education
.
The next speaker was Com. Sukhendu Sarkar (Shramik Krishak Sangrami Manch) who referred to an article written by Ashim Chatterjee and discounted its positions on several counts, particularly the assertion that Naxalbari took place “inspite of” Com Charu Mazumdar. He was followed by Com. Bhala Chandra Shadangi (CPI(ML)-New Democracy spokesperson of Odisha). He upheld the path of Naxalbari as the road to Indian revolution.

He highlighted that Modi Yogi rule had heightened the danger of Fascism. All those opposing them are branded as ‘ánti-national’ whether they are CRs, students, democrats, Muslims, Adivasis or Dalits. He said we must stand with all these sections and also advance the struggle. He hailed the anti acquisition struggles of the peasantry, the land struggle by Dalits in Punjab, the struggle in Bastar against which one lakh CRPF has been pitted, and the struggle for self determination in Kashmir which is facing the might of the Indian army.

He said he wanted to raise certain questions as the issue before this meeting was not whether Naxalbari path was still relevant. He said the ruling classes laid a trap of official land reforms to distract the movements. The next speaker was Com. Pronob Naik, who commented on the speeches of some comrades who spoke before him and dealt in detail with the aspects of the Samadhan policy announced by Rajnath Singh against CPI(Maoist) in Bastar.

After him Com B. Pradeep (General Secretary of IFTU) addressed the gathering. He paid homage to the martyrs of Naxalbari and Srikakulam and to Coms. CM, SN, CP, DV Rao, Nagireddy and others. He emphasized that the land issue is alive even in Punjab where so many said this issue is over and capitalist development has occurred.

It is also alive in the anti acquisition struggles. History asserts itself and as Marxist Leninists can we still say that change in the social structure can be brought about by parliamentarianism? If we say no changes have taken place in last 50 years we would be dogmatists.

Yes there have been changes especially changes by the policies of globalization but they are not basic in nature and have not basically altered the situation in India. He ended by saying we must bring up massive people’s struggles around a core of armed struggle.

President of the meeting Com. Puronendu Shekhar Mukherjee was the last speaker and he read out from his writings on Development. After he ended his speech, he called on Harsh Thakor to speak. After his short intervention, the meeting ended with the singing of the Internationale in Bengali.
The proceedings of the meeting were enlivened and participants enthused by revolutionary songs presented by Com. Meghnath (WB), songs including by Arunodaya (Andhra Pradesh) and comrades from West Bengal and Telengana along with folk songs and an adivasi dance.

The occasion was momentous, the gathering enthusiastic, energetic, passionate and many really excited to be in Naxalbari
Posted by nickglais on 6/07/2017 12:29:00 PM