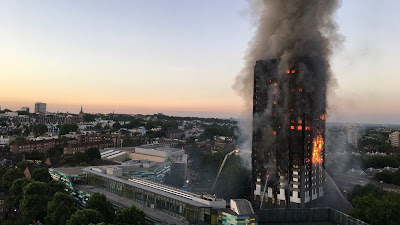 Following the terrible disaster at Grenfell Tower, North Kensington, London, there has been much criticism and anger about the inadequate response of Kensington and Chelsea Borough Council and the national Government in helping the victims of the fire. A fire in residential quarters on this scale is unprecedented so it is not surprising that the local council's response has been rather inadequate especially given the severe cuts there have been in public services in recent years. However, there is also a very positive side to this tragedy and that is the response of the local people to dealing with their immediate problems.

The surviving residents of Grenfell Tower and other local people did not wait for local council officials to act but immediately started to organise themselves to provide food, shelter, clothing and other necessities for those affected by the disaster. People outside of the immediate area and across the country donated a vast amount of money, food, clothing, bedding and other items for the relief effort. In fact, vastly more donations have been received than can be immediately used. As the local organisation has developed an attitude of resentment and opposition to both local and national government officials has developed for their shortcomings.

What has been very clearly demonstrated in the area around Grenfell Tower is the capacity of ordinary people to get organised to take care of themselves. Local and national government are rightly being criticised for their failures over many years to put in place effective building and fire regulations. At the same time the creative capacity the local people have shown in helping themselves shows that we do not really need highly paid and privileged officials and politicians to tell us what to do, to “manage” our lives for us. We are quite capable of getting our own act together.

The multi-ethnic and multi-national character of the residents of Grenfell Tower and the surrounding area is very noticeable. Many are refugees from conflicts in countries where British imperialism has played a part in creating disorder and chaos, e.g. Syria. This in no way prevented these people working together with white British people to relieve the suffering. This instance shows that the efforts of racists and fascists (including Islamic fundamentalists) to stir up hatred between different ethnic and national groups in Britain will ultimately fail. Human beings have a natural affinity to co-operate with each other but this is often disrupted by reactionary elements acting in their own interests.

In the capitalist system in which we live the energy and creativity of most people is severely limited by the oppressive and exploitative structures in which we are trapped. Both in work and in the wider society we are constrained by complicated bureaucratic organisations whereby sizeable layers of “managers” try to control us so as to maximise our economic exploitation for the benefit of the tiny capitalist ruling class. The apologists for capitalism claim that society would descend into chaos if it were not for the efforts of the directors and managers to keep our noses to the grindstone.

The people's response to the Grenfell Tower incident shows that this claim is a lie and that we are perfectly capable of leading our lives effectively and efficiently without a lot of bosses telling us what to. Tragic as it is, the people's response to this disaster shows that socialism leading on to communism is not some unrealistic fantasy but a real possibility arising out of the everyday capacity of human beings to freely work together in ways which enhance our lives.

POWER TO THE PEOPLE!
Revolutionary Praxis