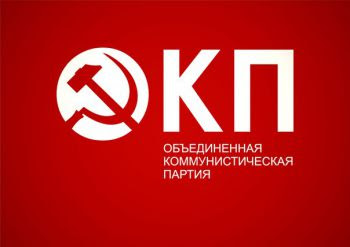 Democracy and Class Struggle tries to give a view of Russian Communist Movement - its problems and prospects  for our readers.

Among the non-Marxist trends, the disintegrating impact on the communist movement is exacerbated from within by the current, which in the "Communist Manifesto" is defined as "reactionary socialism".

Exposing the abomination of today's criminal capitalism, it seeks its ideal in the patriarchy of pre-bourgeois Russia . Its guidelines are the fusion of "white" and "red" ideals, "communality, sobornost, nationality", great-power, rejection of internationalism, union with the church.

Hence the constant craving for images and symbols of the pre-revolutionary period.

Hence the ideological reliance on Slavophilism, Russian religious and white emigre philosophers. This direction plays on the offended social and national feelings of the Russian people, and, above all, finds a response among the most backward part of the working people.

It completely discredits the communist movement, in fact it joins with National Socialism. Often the reasoning of such "Communists" is indistinguishable from the theses of official propaganda of the bourgeois-oligarchic regime.

At the present time, the struggle of the communist organizations expressing the interests of the proletariat has largely been reduced, including by the efforts of the authorities, to the parliamentary struggle and the struggle in the elections.

In these conditions, the Communist multi-party system became a brake on the elimination of the rule of the bourgeoisie.

The shift in the work of the parties towards parliamentary methods of struggle, the appearance of separate "detachments" and "columns" in the elections, the use of communist organizations in the struggle for the votes of voters from the arsenal of bourgeois election campaigns discredit the communist movement as a whole.

Their range is from the Maoists to the "communist conservatives".

However, if the former are small groups that do not significantly affect the movement, then the latter among the left-wing Communists today prevail.

Continually swearing fidelity to Marxism-Leninism, they completely abandon the Marxist analysis of the contradictory processes unfolding in the world, from Lenin's fearlessness in assessing reality, however unpleasant it may be.

Conservatism substitutes such an analysis with common slogans that are correct at all times, but from an endless repetition that look like spells.

If "Orthodox Communists" rely on the values of the "day before yesterday" day, then "conservatives" - on the images of the recent past, especially the Stalin period.

They are resolutely against the critical analysis of the Soviet, initial stage of socialism. They do not want and can not learn from the defeat.

These fundamental principles predetermine the extreme dogmatism and sectarianism of "conservative communism." Conservatism repels the broad masses, especially the young, from the communist movement, hinders the development of modern Marxist theory.

The slogans, consisting in most of the curses and threats against the regime, are absolutely correct in substance.

Their predominance is largely due to the gravity of everyday existence, the protracted and unfulfilled hopes for an early revival of Soviet power. But you can not win under these slogans.

The ideological opposition to non-Marxist trends in the communist movement does not abolish the strategy of the OKP, aimed at maximizing the strength of all Communist parties and other left-wing organizations of socialist orientation in the struggle for the cause of the working people.

The revival of the united communist movement is historically inevitable. It will happen the sooner, the faster the Communists understand the need to bring their strategy and tactics, practices and forms of political struggle in line with the demands of the 21st century.

I would say that this is rather a reflection of the official Russian policy that tries to unite communism and conservatism.

To a certain extent this is applied to the Russian Communist Party (KPRF) - it is obvious that its leadership at least follows this sort of policy.

In short, this policy is a characteristic feature of parliamentary parties that seek mass popular support in elections, trying to win sympathies in all possible layers of society.

The analysis is therefore rather appliable to parliamentary parties in general (in modern Russia) that follow the trends imposed by the government's media and propaganda.

The comments by Dmytry Kovalevich are too brief, can he please elaborate these further a bit? Also, an introduction to Comrade Kovalevich would be helpful.