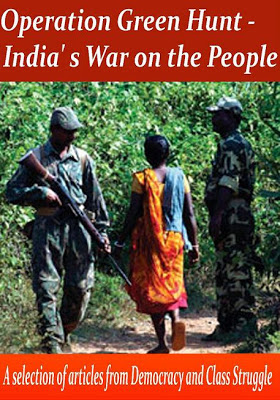 Democracy and Class Struggle publish a report of death of 20 comrades in Chattisgarh's Bijapur on Sunday -  we are days away from the 50 Anniversary of the Naxalbari Uprising.

The Indian State cannot kill the idea that rose at Naxalbari - it is immortal as are the martyrs who have fought for India's day of National and Social Liberation.

India must free itself from the brahmanical Hindu Rashtra - Brahmanism and neo Liberalism resonate in India today - but they will create their own gravediggers as history has shown.

In major operations against Maoists, 20 Naxalites were killed by security agencies in Chattisgarh’s Bijapur on Sunday. “About 350 jawans part of the Operation, first time saw Maoists wearing COBRA uniform, 20 naxals have been killed in Operation,” IG, CRPF was quoted as saying by ANI.

This comes days after 25 men of the Central Reserve Police Force (CRPF) were martyred in a deadly attack by Naxals in Chhattisgarh’s Sukma area.

Two police personnel were also reported killed in the encounter.

The injured men reportedly belong to the District Reserve Group (DRG). ANI reported that Indian Air Force evacuated the two injured personnel and airlifted them to Ramakrishna hospital in Raipur.

The encounter, which apparently looks as a major success, came weeks after 25 CRPF jawans were killed in Sukma district.

In another Maoist encounter in the state, a Naxallite carrying a reward of Rs 16 lakh on his head, was killed in an encounter with the police in Bastar district, news agency Press Trust of India reported.

The report said that the maoist identified Vilas alias Kailash alias Aaytu, the secretary of Barsoor area committee of Maoists, was killed in the face-off with a team of local police in Burgum police station area.