Wales: Tryweryn and the Colony that dare not speak its name : Statement of the Great Unrest Group for a Welsh Socialist Republican Party 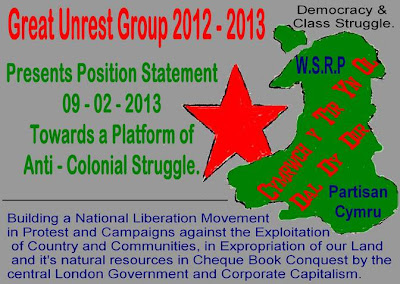 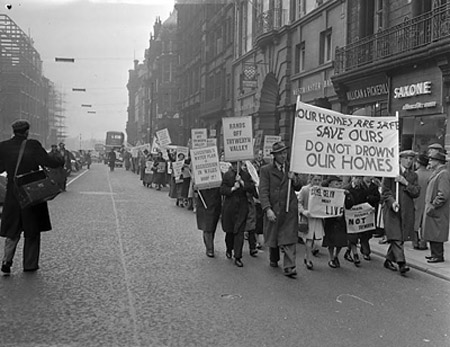 Wales, not Ireland was England’s first colony and the Anglo Norman Castles which surround Wales are a testament to the fact of the occupation and colonisation.

There are more Anglo Norman castles per square mile in Wales than any other European country.

The ethnic cleansing of the Welsh started in 1282  and they were  driven from the new English Borough Towns into the hills.

In the hills the Welsh were called bandits, but the truth is they were patriots, who fought courageously and heroically against a powerful invader for hundreds of years.

They left us the National Liberation War of Owain Glyndwr to remember them.

Then we had the Tudors an English Monarchy that dared not use their Welsh name until a 100 years after their victory at Bosworth Field.They were known as the Richmonds not the Tudors.

This English "Richman" Monarchy rewarded its English followers with large tracts of  Welsh Land and were careful to hunt down the last descendent of the Welsh Royal house to kill off the bloodline and extinguish any hope of Welsh Independence.

But the lying Tudor historians record this as a Welsh King – what an insult to our intelligence.

The Welsh Gentry and the Landlords not the people of Wales allied with the "Richman"Tudor moneyed filth following annexation..

Then we have the industrial capitalists from England arriving to exploit Welsh resources and dominate the exploitation of our natural resources and the appearance of a new breed of Welsh capitalist collaborators joining the ``British Capitalist Class in England in the 19th century.

An outstanding six volume work on Welsh Land even worthy of study today.
The Land of Wales stolen over several hundred years was not going to be returned to the people of Wales.

Irish Land was returned to the ownership of Irish tenant farmers but Wales was to continue as a country with only a small proportion of its citizens and tenants owning its land.

Lloyd George abandoned the Welsh Land Question and the rewards of his betrayal are public knowledge.

- it is time for the masses and not the collaborationist classes to lead Wales.

Tryweryn, yes reminds us of our history and our land have been twisted to serve the current British State.

But they don’t treat us like a colony today you will hear some people say  – forget the history.

Our past is our future , listen to what "British" England really thinks of us, listen to the patronising tone of Nicholas Bosanquet who is clearly blaming the poor for economic problems and the colonial poor to boot, the Welsh.

"In 2006 Nicholas Bosanquet published Whitehall’s Last Colonies, a report that encapsulated the right wing approach to areas like the Welsh Valleys.

It takes the view that all the problems in the Valleys are caused by issues in the Valleys: social fecklessness, a lack of entrepreneurial spirit and an over-dependence on welfare.

"Its subtitle is telling: ‘Breaking the cycle of collectivisation in the UK regions’. Bosanquet comes up with the same solution as was put forward in the 1920s: people from impoverished parts of Wales have to be persuaded to go to work elsewhere."

We have people in Wales whose minds have been so colonised that they accept the Nicholas Bosanquet view and they tend to be centre right and right wing politicians some sadly even in the Nationalist camp who are happy to exploit immigration but do not oppose the real problem depopulation.

We are having a new Depression in Wales and still this right wing economic thinking dominates.

No new radical thinking in Wales like in the past of Left social democrat Aneurin Bevan the founder of the Welfare State from Wales. We have exposed Plaid Cymru's shallow so called new thinking here

The idea of  a National Health Service was born out of Aneurin's Bevan's experience on the management commitee of the Welsh Tredegar Workmens Medical Aid Society in the early 20th century - he humbly learnt from the Welsh people.

Today, we have an Assembly of Welsh Quislings implementing the latest Con Dem Whitehall cuts and Tan 8 Welsh Land Grab Terrorism destroying the Welsh countryside under a fake banner of a "Green" Wales.

No spirit of February 3rd 1935 of mass resistance to National Assitance cuts in the Valleys of Wales, no learning from the people like Aneurin Bevan.


Tryweryn reminds us why we created the Great Unrest Group for a Welsh Socialist Republican Party on St David's Day 2012.

Our demands are simple we want a Welsh Land Act and we want Royal and Aristocratic Estates in Wales returned to the Welsh People.

Yes. Land To The People of Wales after several hundred years of occupation, - yes a most modest demand.

We want the capital of Wales in Institutions of the People of Wales.

Capital to the People of Wales not with British Broken Banks.

With Land and Capital in the hands of the Welsh People, the third element Labour can be added.

A new Socialist Economy can be created and Wales can undergo tremendous economic and cultural Renaissance.

Land, Labour and Capital combined into one to create a future for Wales

Yes, Wales, can be there at the end of time has the Old Man of Pencader said, if we fight for that future - however if we do not three million* Welsh People will lose the right to that future.

The central target of economic policy for a truely Welsh Poltical movement is the fight against depopulation.

Support the Call for a  Welsh Republican Congress to secure that future.

* Note: Only two million of the three million people living in Wales identify themselves as Welsh has Dic Mortimer has said the Welsh are an endangered species.