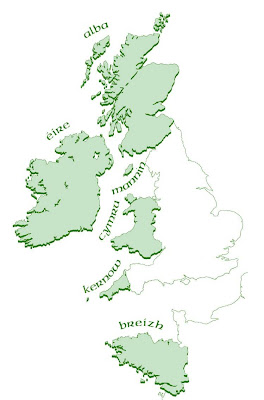 News from the Celtic League

A popular Breton magazine is at the centre of a controversial debate about the freedom of the French press following the censorship of a front page story by the boss of a well known French newspaper, who owns a share in the publication.

The February 2013 edition of 'Bretons; magazine featured a front page story of the results of a survey showing that 18% of people in Brittany are in favour of independence.However Francois Hutin from the French newspaper 'Ouest-France;, which owns a 30% stake inthe magazine and distributes the publication across Brittany,apparently disagreed with the article and demanded that the story was changed. The difficulty was the magazine had already been printed and was on sale from last weekend. Nevertheless, despite the cost, the magazine was withdrawn from the shelves of newsagents, a new leading article written (with the less controversial title of '69% of Bretons do not know their History' ) and the new edition is expected to be ready for sale once again throughout Brittany from today (1st February).


It seems though that the debate has only just begun with a spokesperson from the French union, Confédération française démocratique du travail (CFDT), condemning the move, saying that the decision to pull the magazine from the shelves and change the article was an act of censorship, unbecoming of a newspaper boss who has consistently advocated for the freedom of information. The editor of the 'Bretons; magazine, Didier Le Corre, argued that the magazine was withdrawn, because of a printing problem.

The French state is usually proud of its reputation for the freedom of its press, with the French government last September even banning protests against the publication of a French satirical magazine that published a cartoon denigrating Islam's Prophet Mohammad. However it seems that the results of surveys into the opinion of Breton people about their views of Breton self determination and their sense of identity are far too controversial to publish even for the French press!

The General Secretary will determine the appropriate branch or General
Council Officer to respond to your query.