Hands Off Wales by Wyn Thomas reviewed by Nickglais 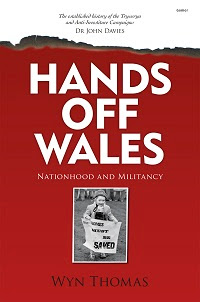 "There are few in Wales today who believe there is any place in modern Welsh Life for a similar campaign of militant activism. It belongs to history. It belongs to the 1960's"

The view expressed by Wyn Thomas is that the Militant Welsh Nationalism of the 1960's is now part of history and should not be emulated in the 21st Century.

What  however is clear to Wyn Thomas is that the record of Welsh Militancy in the 1960's was being airbrushed from history.

There was a reluctance in academia to give the subject of Welsh Militant Nationalism in the 1960's due respect. It was not going to advance anyone's academic career.


Therefore the production of what is a academic history of the militant action of Free Wales Army and Mudiad Amddiffyn Cymru is welcome even if we do not share the political views of Wyn Thomas as to the inapplicability of militant direct action in 21st Century Wales.

Wyn Thomas's observation that the Free Wales Army in Welsh History is similar to that of Iolo Morganwg rings true,first being treated as a mad aberration by the establishment but later has being afforded a modicum of respect for its propaganda in matters Welsh by the people


The Free Wales Army was more a propaganda machine than an army and its best propagandist was undoubtably Gethin Ap Gruffydd who also utilised his skills in the Patriotic Front.

The Free Wales Army which had an eclectic nationalist ideology was correctly sized up by John Jenkins of Mudiad Amddiffyn Cymru who is quoted in Wyn Thomas's Hands Off Wales  book has saying :

After reading this book you cannot be left in any doubt about the integrity of John Jenkins.
During the Investiture of Charles Windsor Prince of Wales in 1969 , MAC had the British State on tenderhooks and was its high point of the organisations effectiveness.

The fact that only two cells of Mudiad Amddiffyn Cymru were ever exposed means that despite the arrest of its leader the organisation remained intact.

This book reminds us of the importance of history - especially when Welsh People fight back - a period that the powers that be, try to constantly erase.

In 1935 Wales saw militant resistance against  national assistance cuts resulting in the so called Blaina "Riots" when 200 people were injured by the police and dozens arrested - this struggle was led by Welsh Communists but has been erased from history with no academic study to record its presence for the future, the FWA and MAC thank goodness have not suffered the same fate.

However be it 1935 or 1965 when Welsh Resistance was militant, it was basically successful contrary to our moral preaching inferiors, the Quisling collaborators of the British State.

1935 opened the long road to the Welfare State, Aneurin Bevan one of the architects of the Welfare State sat in on the trial of The Blaina "Rioters" in Monmouth to demonstrate his solidarity with them.

1965 and Trywerwyn and the investiture of Charles Windsor as Prince of Wales led to a resurgent militant nationalism, that was to underpin the revival of Plaid Cymru and the Welsh Language.

If there is a message from Wyn Thomas's book it is not the one he leaves us with on the last page of his book that militancy is past.

The integration of the struggle for national and social liberation is the need of the hour in Wales.

We need to create full spectrum resistance to the British State with its austerity and neo-liberalism that is destroying not only the Land of Our Fathers but reducing us to economic servitude.

We can learn from Ireland and Scotland in this regard and in particular the works of James Connolly and John Maclean on how to integrate class and national questions.

We have a Wales to Win for social and national liberation in the 21st Century.