Wales : February 3rd 1935 - A day burned into Welsh working class memory but excluded from history because the workers won.


On Sunday February 3rd 1935 Gwyn Alf Williams writes the Valleys of South Wales came alive, 60-70,000 people were on the march in the Rhondda.

Pontypool had its biggest ever meeting of 20,000 people, there were also meetings in Neath, Britton Ferry and Barry.

A meeting was organised in Merthyr and 50,000 people matched down the Aberdare Vallley to Mountain Ash.

People were protesting the 10% cut in National Assistance and the Unemployment Assistance Acts of 1934/35.

The campaign to cut National Assistance during the economic depression culminated in the so called Blaina protests against the cuts also called the Blaina Riots on 21st March 1935.

It was a battle that the working class of South Wales won, during the trial of the Blaina Rioters the Home Secretary was on the phone to the judge he was so worried - the cuts were halted and the slow climb back out of the Depression began.

It was a turning point that proves that the working people make history a lesson that the powers that be want us to forget.

The Labour Party and Plaid Cymru are today proud to declare themselves parties of power and not protest.

They take the view that another squalid deal in the Welsh Assembly is what the people want to implement the Con-Dem dictates of London and Whitehall.

Of course they speak against the cuts but essentially do nothing - they are not ashamed on their watch that Wales has become the poorest region in the United Kingdom.

Yes they could be organising mass protests  against the impoverishment of Wales but that is not why they are there.

They are there to manage decline in a "Welsh Assembly" of Quislings of the British State.

There needs to be an entirely different strategy if the people of Wales are to fight their way back out of this economic crisis. A Strategy, and not just tactics, based on struggle like that of the people of South Wales in 1935 which led to the Welfare State.

Fundamental is that the new leadership will be not ashamed of protest like the current bunch but are ashamed of the poverty that is now gripping Wales.

The organising centre of such protest can only be a Welsh Republican Congress, based on principles of direct democracy, and not the failed idea of capitalist representative democracy.

Direct Democracy is Welsh to the core, it was the Welsh Chartist meaning of Annual parliaments and the Miners Next Step of 1912 rejected Parliamentary Democracy for Direct Democracy.

A Welsh Republican Congress is a necessity however difficult and hard it may be to bring into existence has the current political establishment in Wales has failed. 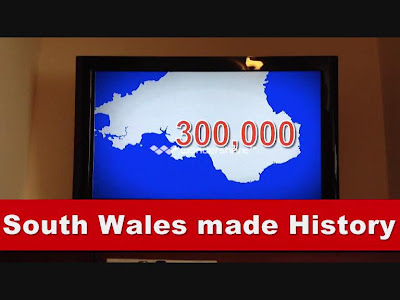