Urgent - Emergency : Fight to Save the Life of Kevin Rashid Johnson 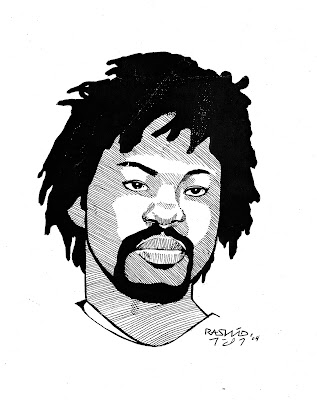 Kevin Rashid Johnson is a political prisoner and leader of a prison organization called the New Afrikan Black Panther Party. He is an outspoken communist revolutionary whose life is in danger.
Kasama recieved the following from Victor:
I have not heard from Rashid for about two weeks, which is surprising, because he normally sends me 2 or 3 letters a week, sometimes for other prisoners. I just received a letter written Feb. 11, at Rashid's request, by another Snake River prisoner,

"This is about Rashid. We need a lot of help. They are trying to kill him. On Jan. 31 they put something in his food that made him crazy.

On Feb. 2 he took 30 pills. They did not do anything to get the pills out of him.... On Jan. 4 [sic; I assume he means Feb. 4] he ate 3 razor blades. This is all on videotape. They lied and said the X-ray showed nothing. The [blades] are still in him right now.

He has not eaten since Feb. 3. He has not drunk anything since Feb. 5.... He is passing out and they won't do anything to help him.... Said he is the one that won't eat or drink so they are not helping him at all.

I phoned Snake River immediately. If you want to speak with anyone, you have to dial 541-881-5000 and then press "0". I left messages with his counselor, Alice Tomlinson and also with a staff member named José Delgado. So far I have not heard back from either of them. I then called again, saying that it's an emergency and I needed to speak to someone who would pick up (I mentioned the warden's office).
They connected me with a Sergeant Di Andrea. He looked up Rashid on his computer and said he was "all right"; I said I wanted to know more specifically, so he put me back onto the counselor's answering machine. Obviously he is not "all right"; on the other hand, I think that if he had died, they would have had to tell me. I will keep trying. We should make many calls, reaching as high up as possible.

There are obviously a lot of questions here. How could it have been on videotape? How could he have obtained all those pills? etc etc. The idea that he would try to destroy himself is totally out of character; on the other hand, I suppose that with certain kinds of drug, many strange things are possible. Let's all stay in touch if we get any news.

I am sending this both to the listserv and to the individual addresses I have, just to make sure everyone gets it.

Ironically, just 2 days ago I mailed Rashid the proofs for the article of his that we will be publishing in the July issue of Socialism and Democracy.

Let's all write to him (address below). Even if the letters aren't delivered, the officials will know that a lot of people are ready to protest whatever abuses they inflict.