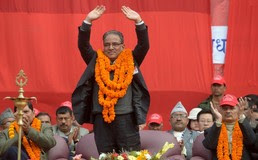 picture Neo Revisionist Leader Prachanda at UCPN Meeting
The General Convention of the Unified Communist Party of Nepal (Maoist), 2-7 February 2013, gave an unprecedented and disappointing message to the revolutionary communist parties of the world and Nepal. It  went to the Chunbang way disrespecting the last two National Conventions of Kharipati and Palungtar.

The Baidhya faction ahead of the Bauddha National Convention had blamed the UCPN(M) leadership that it had plunged into opportunism and surrender-ism. Because Prachanda and Baburam had dissolved the party's  People's Liberation Army including the YCL, and other establishments, and had handed over the keys of the  cantonments to the government on 11 April 2012 without writing the People's Federal Democratic Constitution.

The historic Bauddha National Convention decided to establish the CPN-M.  One step forward to the charges of opportunism and surrender-ism, the Bauddha Convention followed the parts of nine-blunder-charges (of nau 'ga' -gaddaari) to the establishment side  by this author in the first historic separate Central Committee Meeting in Kopundole on 31 May 2012 .

Out of nine charges, the first was of neorevisionism. (see Rajdhani Daily, Box News,1.6.2012, p.1) The Kopundole CC meeting did not pass it the very day. Till then, the party was not clear to split. But the nine-charges (nau ga proposal) developed confidence  on theoretical and practical bases to come to a conclusion of dissidence to the line of people's revolt. The theme in general was passed by the Bauddha National Convention of 15-19 June 2012 and the 7th General Convention of the CPN-M of 9-15 January 2013 blaming the UCPN (M) as neorevisionist.

The neorevisionism is much worse than deviation-ism. The deviation-ism only misguides the process of the evolution of the proletarian revolution and socialism, but the neorevisionism destroys the root cause and the soul of the idealogical and strategical base of the party. The political document of the 7th General Convention of the UCPN(M) clearly proved that the charges imposed by the CPN-M to the UCPN(M) were true. It is because the document categorically gave up the party's strategy to form a People's Republic of Nepal as envisioned by People's War in 1996 based on Marxism, Leninism and Maoism.

The UCPN(M) accepted 'double standard' after being 'unified' writing both Maoism from RIM, and Maoist Thought as Prakash proposed. After 2nd National Convention, it  made a potpourri of  Prachandapath like  shining path of Gonzalo. Unfortunately, the concept of prachandapath also had given birth by this author through Martyr Com. Pratap during underground meeting with him earlier to the 2nd National Convention, which had passed it as basic guideline (see Prachanda: Unknown Revolutionary, Roy: 2008, p.65).

Both Shining Path and Prachandapath were defunct after Gonzalo was imprisoned and CPN-M denounced the latter simultaneously. Neither CCOMPOSA nor the Philippines Communist Party liked them. Due to the fear of the revolutionary cadres inside the party in the General Convention, Prachanda  hesitated to use the terminology People's Multi party Democracy ( jabaja ) like Madan Bhandari did. But Prachanda cleverly manipulated the cadres saying 'Federal Constitution with identity through Constituent Assembly and Economic Development through capitalism'. Was People's War only for capitalism?

Mao in early 40's had classified many societies to be of semi-feudal. Many monarchies like Nepal's were the pillars of feudalism. The situation still prevails in Nepal even after the abolishment of 240-year old Shah dynasty. Semi-feudal society Prachanda agreed, but work plan while creating a socialist economy, Prachanda deviated. In one point, Prakash clearly mentioned that the party would go to democratic socialism (which NC during BP's time used to follow) quitting Maoism. Is this not cruel revisionism to the proletarian revolution for which nearly 13 000 martyrs sacrificed their lives?

They clearly spoke that New Democratic People's Revolution has been over. The task now was to preserve the achievements. The CPN-M in contrary regards it as half way only. Prachanda and Baburam have deceived the spirit and destination of the People's War.

They also well served the USA for lifting the terrorist tag by not denouncing imperialism. Usually, all communist parties of the world do so. It is clear that now Prachanda and his team wanted a safe landing from the bloody war they created. Many speculate it is to skip away from the fear of the probable ICC charges o them. Therefore, they wanted the party quit the path of dialectical materialism and democratic centralism for building socialism. Rather they plunged into the same once failed parliamentarian system.

Prachanda did not foresee any contradiction with regional hegemonism, expansionism and interventionism. He rather borrowed the word 'neocolonialism' from the CPN-M to confuse/satisfy the cadres. If he cannot foresee any major contradiction with regional interventionism, how can he see the situation to be of neo-colonial? How many of Baburam's 40-point and CPN-M's 70-point demands have been fulfilled? Prachanda's vision masks the  lies making the document self-contradictory.