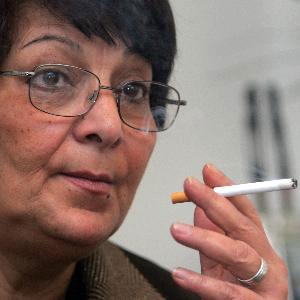 RAMALLAH: Speaking at a panel discussion in Istanbul, Turkey, Palestinian icon Leila Khaled denounced the Syrian opposition, arguing that what is presently occurring in Syria cannot be called a “revolution,” according to Angry Arab News Service.

Khaled, a member of the Popular Front for the Liberation of Palestine (PFLP), acknowledged the “legitimate demands” of the Syrian people, but said that the armed opposition is “fighting for a different agenda,” Angry Arab reports. She suggested that the Syrian opposition is part of a broader US foreign policy agenda in the Middle East, in which Turkey, the Arab Gulf states, and the United States aim to ensure Israel’s security.

“Those who are hosting US airbases cannot stand with the struggle of Palestinians,” Khaled said.

According to Dicle News Agency, she added, “The most concrete examples of the USA’s hegemony in the Middle East are the countries including Turkey, which host American bases [and] camps. I have a say for the regimes, which are being danced like chess pieces by the USA, do not forget the uprisings [that] Egyptian and Tunisian people launched. Give up collaborating with imperialists. Due to the fact that when peoples rise up, the USA is going to abandon you.”

The panel discussion was titled, “What’s happening in Syria,” and was hosted by Turkey’s Socialist Anew Foundation.

“Whatever kind, we are against outside intervention in Syria. People are faithful in respect to the question of defending their hometowns. I’m calling on Arab countries leaders who are in the collaboration; Don’t try your peoples patience. Look, remember Hitler. Remember the history. Hitler eradicated Europe and launched World War 2. However, Hitler is now in the garbage dump of the history,” Khaled said, adding that everyone is guilty of Hitler’s crimes.

Khaled is known primarily for her involvement in large PFLP operations in the 1970s, including a pair of plane-hijackings that resulted in her icon status among Palestinians and leftwing internationals.

The Angry Arab’s As’ad Abu Khalil criticized Khaled, saying, “I believe that Leila Khaled has compromised herself in recent years with ties to the Hariri family. Furthermore, the present-day PFLP has been compromised: its branch in Syria works closely with the Syrian regime while its branch in the West Bank works closely with the PA collaborationist regime. The organization should have been dissolved long time ago, if you ask me.”
Posted by nickglais on 2/04/2013 04:06:00 AM