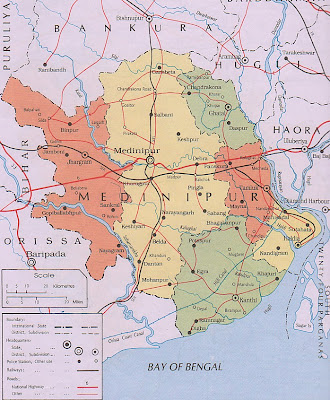 We, the political detainees of Medinipur jail have come to know from the media that an international forum has been formed to oppose operation green hunt in India and in support of the ongoing democratic struggle. This forum is going to launch a campaign in different countries for a week starting from 2nd April to 9th April, 2011.

During this week, on 4th April we, who have been detained for political reasons would be on a campaign as well.

On that day the political prisoners lodged in different jails of West Bengal would be on a hunger strike for the same set of demands. These are,

i. Operation green hunt should be immediately stopped.

ii. Withdraw joint forces from Jangalmahal and revoke the 144 act; the government of West Bengal should start a dialogue process with the People's Committee against Police Atrocities.

iii. Withdraw all false cases and release all political prisoners.

iv. Azad, Sasadhar Mahato, Lalmohan Tudu, Sidhu Soren, Umakanta Mahato, Biplab Bandopadhyay and other martyrs were killed in fake encounters. There should be judicial probe in each of them.

v. Scrap all black acts including the UAPA.

In the last few days an important news which have been reported in the media is the brutal lathi charge by the administration in ward no. 3 of Medinipur jail, theft, attacking prisoners with open razors. 55 people from ward no. 3 alone have been injured in this. 17 of them are in critical condition. We have come to know that political prisoners Kaushik Biswas and Idris Ali were mercilessly beaten up in Baharampur jail.

All this is the result of overall fascist policy of the CPM government of Bengal to torture prisoners. We appeal to all democracy-loving citizens of West Bengal to speak out and urge them to launch protest programme on the said day and the said week in support of our programme. We have seen the statement of PCAPA on atrocities by administration on prisoners. We urge the PCAPA to realise the conspiracy of rulers and the brutality of the incidents and be part of a larger protest movement.