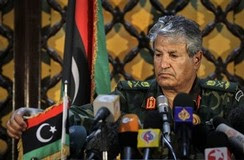 BENGHAZI, Libya — With the rebels’ battlefield fortunes sagging, the three men in charge of the Libyan opposition forces were summoned late last week by the ad-hoc leadership of their movement to a series of meetings here in the rebel capital.

The rebel army’s nominal leader, Abdul Fattah Younes, a former interior minister and friend of Col. Qaddafi whom many rebel leaders distrusted, could offer little explanation for the recent military stumbles, two people with knowledge of the meetings said.

Making matters worse, the men could hardly stand one another. They included Khalifa Heftar, a former general who returned recently from exile in the United States and appointed himself as the rebel field commander, the movement’s leaders said, and Omar el-Hariri, a former political prisoner who occupied the largely ceremonial role of defense minister.
“They behaved like children,” said Fathi Baja, a political science professor who heads the rebel political committee.
Little was accomplished in the meetings, the participants said. When they concluded late last week, Mr. Younes was still the head of the army and Mr. Hariri remained as the defense minister. Only Mr. Heftar, who reportedly refused to work with Mr. Younes, was forced out. On Sunday, though, in a sign that divisions persisted, Mr. Heftar’s son said his father was still an army leader.
As the struggle with Colonel Qaddafi threatened to settle into a stalemate, the rebel government here was showing growing strains that imperil its struggle to complete a revolution and jeopardize requests for foreign military aid and recognition.

Confirmation by Al Jazeera that is Major General Abdul Fattah Younis, is still leader of the Libyan Liberation Army and has given a press conference, amongst the points he mentioned were: