Levellers, True Levellers, and The Diggers of 1649 - Time for a New Agreement of the People 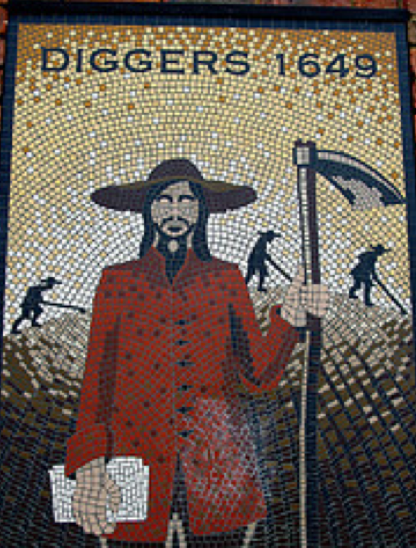 Democracy and Class Struggle calls for support for the March 26th Movement - The Alternative Platform for a  new Agreement of the People.

The Levellers were a relatively loose alliance of radicals and freethinkers who came to prominence during the period of instability that characterized the English Civil War of 1642 - 1649.

What bound these people together was the general belief that all men were equal; since this was the case, then a government could only have legitimacy if it was elected by the people. The Leveller demands were for a secular republic, abolition of the House of Lords, equality before the law, the right to vote for all, free trade, the abolition of censorship, freedom of speech, the abolition of tithes and tolls, and the absolute right for people to worship whatever religion they chose, or none at all. This program was published as "The Agreement of the People".

The Levellers argued that since God had created all men as equals, the land belonged to all the people as a right. Their program was, then, essentially an attempt to restore the situation that they believed had existed previous to the Norman Conquest in 1066; they wanted to establish a 'commonwealth' in which the common people would be in control of their own destiny without the intervention of a King, a House of Lords and other potential oppressors.

It is hardly surprising, given this program of demands, that the rich and powerful felt threatened by the Levellers. This is particularly so, given that some of the Leveller demands, almost 400 years on, have still not been met!

In 1649 Gerrard Winstanley and fourteen others published a pamphlet in which they called themselves the "True Levellers" to distinguish their more radical ideas from the Levellers. Once they put their ideas into practice and started to cultivate common land, they became known as "Diggers" by both opponents and supporters. The Diggers' beliefs encompassed a worldview that envisioned an ecological interrelationship between humans and nature, acknowledging the inherent connections between people and their surroundings.

Winstanley would advocated a new democratic society of the "common man" as opposed to the current society based on privilege and wealth. Many of the political, economic and social reforms advocated would dramatically impact the social order. Winstanley was concerned by the plight of the people at the lower rungs of English Society, the overlooked or forgotten man. The poor, the sick, the hungry, and the destitute who often did not scrape by or were left to die.

The Digger movement at St George's Hill (Surrey) provided an ideal venue for testing Winstanleys' new social experiment. Winstanley rejected the concept of private ownership of all land, and called for a peaceful return of all public lands to the People. Some have even characterized the Surrey Diggers' as a primitive Millennium movement. Later generations have called the social experiment an early form of communism or even anarchism.

After repeated attacks and destruction of their commune and crops by local landowners (particularly by hired thugs and ill-informed peasants) and fines from the high authorities, the Diggers soon faded away.

But, as with the Levellers, Winstanley and the Surrey Diggers struck a blow at the halls of wealth and power of 17th century English society. Their efforts and their philosophy were not wasted on later generations seeking the same spirit of liberty and freedom in a more democratic social structure.

As our work of the Earthly community is advanced, we must make use of gold and silver, as we do of other metals, but not to buy and sell withal; for buying and selling is the great cheat, that robs and steals the Earth one from another: It is that which makes some Lords, others beggars, some Rulers, others to be ruled; and makes Great murderers and thieves to be imprisoners, and hangers of little ones, or of sincere-hearted men.